An Apology for Apologetics

Communication is hard—for many reasons, one being that the same word sometimes has quite different meanings. Apology is one such word, and I invite you to think with me a bit about the meaning, and value, of apology and apologetics.

My Lifelong Interest in Apologetics

An apology often means an expression of regret or remorse for something a person has said or done. But there is another, technical meaning of that same word. Apology can also be legitimately used to mean the verbal or written defense of one’s basic beliefs.

There is a long history of apology being used in the latter sense with regards to the Christian faith, beginning with these New Testament words: “Always be ready to make your defense [ἀπολογίαν, apologian] to anyone who demands from you an accounting for the hope that is in you” (1 Peter 3:15).

One of the important Christian books of the second century CE is First Apology of Justin Martyr (c.156), and his Second Apology was written shortly after the first one.

As a third-year college student, I became deeply interested in Christian apologetics, the religious discipline of defending Christian beliefs through rational discourse.

Philosophers/theologians such as Pascal and Kierkegaard were the Christian “apologists” I was most interested in at first and through graduate school, although I also read and wrote papers by lesser-known thinkers such as German theologian Karl Heim and Hungarian philosopher Michael Polanyi.**

A Good Book on Apologetics

This article was prompted by my recent reading of Randal Rauser’s 2020 book, Conversations with My Inner Atheist: A Christian Apologist Explores Questions that Keep People Up at Night.

Rather than writing more about that book in this article, I invite you to see here for a brief review of that intriguing work by Rauser (b. 1973), a Canadian Baptist seminary professor. 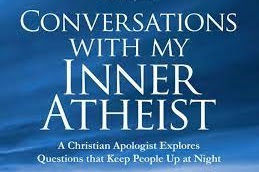 A Different Type of Apologetics

Even though I maintained my initial interest in apologetics, long ago I began to shift my emphasis from apologetics by rational argument to what I sometimes refer to as “apology by life.”##

That shift was prompted by my growing awareness that the main reason so many Japanese students in my classes at Seinan Gakuin University rejected Christianity was not because of intellectual issues but because of ethical problems.

Rejection of Christianity was based far more on what they had learned in high school world history classes about the Crusades, for example, or what they had seen on television about racism in the United States, which they generally thought was a “Christian nation.”

Rauser hardly deals with this matter in his book, although the 20th chapter begins with Mia saying, “It’s often been said that the biggest objection to Christianity is the life of Christians.” That is probably true.

Although I was unable to find the source, I have often heard these or similar words that Nietzsche reportedly said to Christians: “Show me that you are redeemed, and I will believe in your Redeemer.”

For a long time now, Christians have needed to say less about their beliefs and to act much more deliberately and lovingly for peace and justice, that is, for the basic well-being of all people.

** My last essay published by The Seinan Theological Review in Japan was in March 2004, and it was largely on the thought of Karl Heim. It is available for viewing/reading here.

## In footnote 16 of the above article, I wrote, “I have long wanted to write an essay on ‘Apology by Life.’ Apologetics has long been one of my strongest interests, but long ago I realized that the best apologetics may well be done by loving action rather than by words.”

Disclosure: The review I wrote of Rauser’s book and my mentioning of Rauser and his book in this blog article is partly because of receiving the book for review from Mike Morrell and his Speakeasy book review network.