Who would you put on a list of your most admired living people in the U.S.? I haven’t given much thought to making such a list, but if I did, at this point I think I would have to include Bryan Stevenson.
Who is Bryan Stevenson?
Some of you might know quite well who Stevenson is, but I didn’t know anything about him until this year. I have become highly impressed with him, however, from what I have learned from his book Just Mercy (2014) and the 2019 film (with the same name) based on that book. 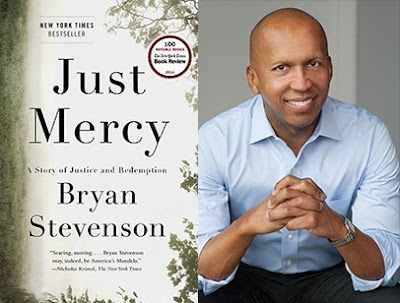 Bryan was born in 1959 in a small town in southern Delaware, and he experienced various segregation indignities during his boyhood years. But he was a straight-A high school student and won a scholarship to Eastern University, where one of his professors was Tony Campolo.
After graduating from Harvard Law School in 1985, Bryan moved to Atlanta and joined the Southern Center for Human Rights (SCHR).
According to their website, the SCHR “was founded in 1976 by ministers and activists concerned about criminal justice issues in response to the Supreme Court’s reinstatement of the death penalty that year and to the horrendous conditions in Southern prisons and jails.”
In 1989, Stevenson founded the Equal Justice Initiative (EJI) in Montgomery, Alabama, and has been its executive director until the present.
Led by Stevenson, the EJI established the National Memorial for Peace and Justice, informally known as the National Lynching Memorial, which opened in 2018, and The Legacy Museum: From Enslavement to Mass Incarceration, which opened the same day.
Stevenson and the EJI speak out about current events also. On May 27, EJI posted “Tragic Death of George Floyd Reveals Continuing Problem of Police Violence” on their website.
A staff writer at The New Yorker recently interviewed Stevenson and the resulting article was published on June 1 under the title, “Bryan Stevenson on the Frustration Behind the George Floyd Protests.”
Why is Bryan Stevenson Admirable?
The subtitle of Just Mercy is A Story of Justice and Redemption. It is touted, correctly I think, as “A powerful true story about the potential for mercy to redeem us, and a clarion call to fix our broken system of justice—from one of the most brilliant and influential lawyers of our time.”
By the time I had finished reading the book about two months ago, I had come to admire Stevenson greatly for his unflinching dedication to helping other people, especially men on death row.
I was then eager to see the movie, which was to be released on DVD within days. I put it at #1 on our Netflix queue—but it was so popular that it was the end of May before we were able to get it.
After June and I watched the movie last Sunday evening, I was even more impressed with Stevenson—and also impressed by the way he was portrayed by the actor who played him. And even though I was disappointed not to see it sooner, it was even more meaningful to watch it during this time of protest because of the killing of George Floyd.
(This month you can rent "Just Mercy" for free through a variety of digital movie services in the US, including Apple TV, Google Play, Amazon Prime Video, Microsoft, and YouTube, among others.)
As a Christian, I admire the way Bryan has lived out the Gospel message he learned as a boy attending an African Methodist Episcopal Church. In most of his public talks he shares one thing he learned at church as a boy: “I believe each person in our society is more than the worst thing they’ve ever done.”
The only other nationally-known lawyer that I admire as much as Bryan Stevenson, Esq., is the late William Stringfellow (see the first half of this blog post)—with maybe Pres. Obama third.
*****
At the close of his review of the film “Just Mercy,” Shane Claiborne, another graduate of Eastern University who studied under Campolo wrote,

Please watch “Just Mercy” . . . . Don’t just munch your popcorn and go home talking about what a hero Bryan is. Doing so dismisses what Bryan is really about because it lets you off the hook. Walk away from “Just Mercy” dreaming and scheming about the hero you want to be.