Recently I have been reading and thinking about the relationship between religion and politics. Two devout Episcopalian lawyers have been helpful in this regard.
The Position of Stringfellow
William Stringfellow (b. 1928) graduated from Harvard Law School in 1956. He soon moved to a tenement in Harlem, New York City, where he worked as a tireless advocate for racial and social justice. Then in 1967 he moved to Block Island, R.I. He lived, and was an active member of the Episcopal church, there until his untimely death in 1985.
Back in September, I re-read An Ethics for Christians and Other Aliens in a Strange Land, the thought-provoking book by William Stringfellow, who was a lay theologian and a stimulating author.
Stringfellow’s book was first published in 1973 during the Nixon Administration, but it seems very relevant to the present situation in the U.S. under the current occupant of the White House.
“Biblical politics” is the title of the first section of the first chapter of Stringfellow’s book. He declares, “The biblical topic is politics.” And then he continues with this long, significant sentence:

How’s that for a weighty sentence! 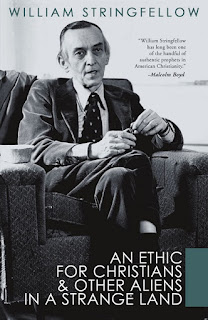 The Position of Danforth
The year of 1963 was a very special one for John Danforth (b. 1936). That was the year he graduated from both Yale Divinity School and Yale Law School as well as the year he was ordained as an Episcopal priest and admitted to the bar.
Danforth practiced law for a while but then became a politician, serving as the Attorney General of Missouri (1969~1975) and then as a U.S. Senator from Missouri (1976~1995).
In September I also read Danforth’s 2015 book, The Relevance of Religion. In his first chapter, Danforth sets forth “four broad principles” for how religious people ought to relate to politics:

(1) We should insist that politics remain in its proper place. It is not the realm of absolute truth and it is not the battleground of good and evil. (2) We should be advocates for the common good. (3) We should be a unifying force, working to bind America together. (4) We should advocate political compromise, and make the case that the spirit of compromise is consistent with our faith.

Danforth’s emphases on compromise, on working with those with different ideas, on listening to others and not idolizing one’s own position are good, important ones—and attitudes/actions that I wish more Washington politicians would put into practice today. 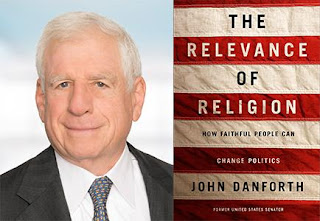