Faith, Politics, and the Common Good

Robb Ryerse is an interesting guy, and I am pleased to introduce him and his book that was published earlier this year under the title Running for Our Lives: A Story of Faith, Politics, and the Common Good.
Meet Robb Ryerse
Some of you may have heard of Ryerse: he has had two articles published in Time magazine this year. The first (dated 1/31/20) is titled “I'm a Pastor Who Ran for Congress as a Republican. Here's Why I'm Encouraging My Fellow Evangelicals Not to Vote for Donald Trump.”
Just two weeks later, Time published his next opinion piece, “I Questioned the Sincerity of Donald Trump’s Pro-Life Stance. The Response From My Fellow Evangelicals Was Troubling.”
Time introduced both articles with these words: “Robb Ryerse is a pastor at Vintage Fellowship in Fayetteville, AR and the political director of Vote Common Good.” And they give the title of his new book, which is about his 2018 congressional campaign.
Ryerse was born in Ohio in 1975. He graduated from a conservative seminary in Pennsylvania and he was the pastor of traditional, fundamentalist churches for ten years before having a crisis of faith and then starting the new “post-denominational” church in 2006.
(Here is the link to the introduction of Robb on Vintage Fellowship’s website.)
His first book, Fundamorphosis: How I Left Fundamentalism But Didn’t Lose My Faith (2012), tells the story of his theological transformation. His new book tells how he ran in, and decisively lost, the 2018 Republican primary seeking to unseat incumbent Steve Womack for the Third House District in northwest Arkansas. 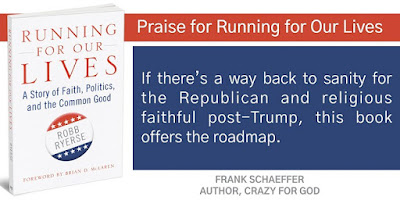 Hear Robb Ryerse
Ryerse’s book is fairly brief and not particularly profound. But it is the intriguing story of a Republican and a former evangelical Christian running for political office—and now actively campaigning against DJT.
I encourage you to read Robb’s book—or at least to click here and read my brief summary of and quotes from his book.
As one who has had a hard time finding much to agree with in most Republican politicians since Senators Mark Hatfield and John Danforth, I found it refreshing to listen to the honest reflections of one who continues to claim he is a Republican—although he is much different from most Republicans in Congress now.
While most of the book is basically about Ryerse’s experience of deciding about, training for, and actually making a spirited run for Congress—and then losing badly—the last four chapters look toward the future and are about seeking the common good in voting.
Please listen to Robb’s 40-second YouTube statement about seeking the common good.
Heed Robb Ryerse
Ryerse is not running for another political office at this point, but he is still actively working in politics. Since the fall of 2018 he has been employed by Vote Common Good, the organization I posted a blog article about in October 2018.
In his book, Robb asserts,

Letting the common good motivate our Election Day decisions means voting for the candidates who are advocating for policies that will do the most good and have the greatest positive impact. . . .
The common good should especially be the motivation for Christian voters (p. 131).

These are good and important words that I sincerely hope all you readers will heed.
*****
I was sent a free copy of Ryerse’s book by Mike Morrell of Speakeasy on condition that I would post a review or blog article about it. I was happy to receive, to read, and now to post this article and to recommend the book, which was definitely a profitable read.
Posted by LKSeat at 5:28 AM