Embarrassed to be a Christian?

Even though 4½ years ago I posted a blog article (see here) titled “An Embarrassed Christian,” once again I am speaking to this same issue with new illustrations. Now, even more than in 2015, I must admit being embarrassed to be a Christian—at least some of the time. 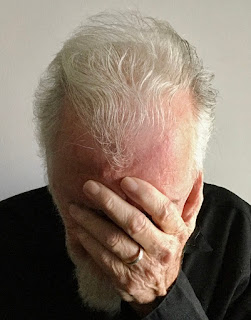 This matter has become an oft mentioned matter in mainstream media—and as impeachment talk intensifies, so, it seems, does the rhetoric of highly publicized Trump supporters who blatantly wear the Christian label.
On October 29, evangelical leaders met privately and prayed with DJT in the White House. Robert Jeffress, who is pastor of the historic First [Southern] Baptist Church in Dallas, was one of those leaders at that White House meeting.
Three days later on Fox Business, Jeffress said, “Evangelicals understand that the effort to impeach President Trump is really an effort to impeach our own deeply-held faith values, and we’re not going to allow that to happen.”
(For more about this, see the Nov. 1 TV interview here and also this Nov. 4 article  titled “Pro-Trump preachers on message against impeachment probe.”)
On October 31, the White House confirmed that Paula White would join the White House staff to advise President Trump's Faith and Opportunity Initiative. (So now we have White in the White House?)
White, who delivered the invocation at DJT’s inauguration in 2017, is a flamboyant, controversial, "prosperity gospel" televangelist based in Florida. She is often identified as President Trump’s “personal pastor.” White, of course, was at the Oct. 29 White House gathering, standing closest to DJT as they prayed.
(For more about White, see this NowThis video, which is a collage of disturbing things she has recently said.)
When included in the same religion as Christian leaders such as Jeffress and White, I am embarrassed to be a Christian—and they are just two of many examples that might be given.
Not Embarrassed to be a Christian
However, I am not embarrassed to be a Christian when, for example, I read Jim Wallis’s new book Christ in Crisis, based on the “Reclaiming Jesus” statement of 2018.
Wallis is critical of both the Republican and Democratic parties, and “Politically Homeless” is a subsection of the seventh chapter. Throughout his book, he is highly critical of President Trump. But it is quite clear that in his criticism of DJT, Wallis writes as he does not because he is a Democrat but because he is a Christian.
In a recent NYTimes article about Paula White, Wallis is quoted as saying that he is repeatedly asked “how can these Christians support Donald Trump when so much that he says and does is literally antithetical to the person and teachings of Jesus?”
Wallis’s response is found in his new book. The answer to “bad” Christianity is more faithful allegiance to Jesus Christ. A statement of what that allegiance means is found in the “Reclaiming Jesus” document drafted during the Lenten season of 2018, and Wallis’s book is largely based on that statement. (Here is the link to that important document.)
So, am I embarrassed to be a Christian? Yes and no.
I am embarrassed to be a Christian when lumped in with people mentioned in the first part of this article. But I am certainly not embarrassed to be a Christian when identified with people like Jim Wallis and the Christian leaders who signed—and the many Christians who agree with—the “Reclaiming Jesus” document.
Posted by LKSeat at 6:09 AM