The Wonderful Concept of Kintsugi

For whatever reason, during the many years I lived in Japan, I never learned much, if anything, about kintsugi. But in the last few weeks I have seen references to kintsugi in recent English-language books/articles, and I have read part of Candice Kumai’s delightful book Kintsugi Wellness: The Japanese Art of Nourishing Mind, Body, and Spirit (2018).
So, What is Kintsugi?
Kumai, who was born in California to a Japanese mother and Polish-American father, calls kintsugi “the Japanese art of golden repair.” It is literally the repairing of broken dishes by joining the broken pieces with lacquer and dusting them with gold powder.
(Kintsugi, 金継ぎ、is pronounced like keen-tsu-gee [as gee in geek without the k].)
“The Japanese believe the golden cracks make the pieces even more precious and valuable,” writes Kumai--and you can see from the picture below an example of a broken tea bowl repaired by kintsugi. 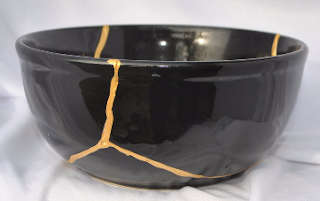 For those of you who might want to try your hand at repairing a broken piece of china or something, you can purchase a “Kintsugi repair kit” at Amazon.com for a tad over US$100 (see here).
What is Metaphorical Kintsugi?
As might be expected, many people have seen a metaphorical meaning in kintsugi. Indeed, on page four of her book, Kumai states that kintsugi can be “a metaphor for your life.” It “teaches you that your broken places make you stronger and better than ever before.”
The website of a British organization called “The School of Life” has a short article on kintsugi. They say that the kintsugi process symbolizes “a reconciliation with the flaws and accidents of time.” Their article ends,

In an age that worships youth, perfection and the new, the art of kintsugi retains a particular wisdom--as applicable to our own lives as it is to a broken tea cup. The care and love expended on the shattered pots should lend us the confidence to respect what is damaged and scarred, vulnerable and imperfect--starting with ourselves and those around us.

(I had not previously heard of The School of Life, but, interestingly, it was founded in 2008 by Alain de Botton, who is the author of Religion for Atheists: A Non-believer’s Guide to the Uses of Religion, 2012--and the book to be discussed this Wednesday at Vital Conversations, the local study group June and I are members of.)
Kintsugi and the Wounded Healer
Religious people also, of course, have found the concept of kintsugi beneficial. For example, Christy Bonner, a Christian counselor, posted an article in April under the title “Kintsugi: The Way of the Wounded Healer.”
Many of you are probably familiar with Henri Nouwen’s idea of the “wounded healer,” explained in his 1972 book published under that title. As far as I know, Nouwen (1932~96) made no reference to kintsugi, but no doubt there have been many, like Bonner, who see the close connection between his writing about the wounded healer and metaphorical kintsugi.
Toward the end of her article, Bonner writes, “I am a wounded healer, I am a cracked bowl put back together with a gold lacquer. I am strong at my broken places. My scars are beautiful. And yours are too."
And then there is Jim Contopulos’s article “Kintsugi—Beautiful Brokenness” (July 2013). He writes, “Kintsugi is a beautiful and accurate metaphor for our lives, and for the life, in the worlds of Henri Nouwen, of the ‘wounded Healer’ as well as for those who would follow Him.”
Contopulos calls on his readers to strive to see the kintsugi beauty in the brokenness of others—and in ourselves. He closes his article, and I close, with these words: “Kintsugi, Lord. Kintsugi.”