In Praise of a “Half-naked Fakir”

A tragic assassination occurred seventy years ago next week, on January 30, 1948. That was the day that Mahatma Gandhi was shot and killed by a right-wing advocate of Hindu nationalism. This article is written in praise of Gandhi, whom Winston Churchill called “seditious” and a “half-naked fakir.”
The Life of Gandhi
Mohandas Karamchand Gandhi was born in 1869. He came to be called Mahatma, which is not a name but rather a term of respect. (“Mahatma” is Sanskrit for “Great Soul” and is similar to the English term “saint.”)
After studying law in England for three years, Gandhi returned to India in 1891 but then two years later went to South Africa where he lived and worked as a civil rights activist until 1914.
The first part of the movie “Gandhi” depicts his struggles for justice in South Africa. (My respect for Gandhi was so great that I went to a showing of the movie on its opening day in Japan, where I was living in 1983; it is still on my list of “top ten” movies.)
Following the end of World War I, Gandhi began to protest Great Britain's control of India. By 1920 he was the leader of the movement for Indian independence, which he finally saw come to fruition on August 15, 1947—just 5½ months before his assassination.
The Work of Gandhi
The lifework of Gandhi was multifaceted, but perhaps of greatest importance is his role in leading India’s struggle for independence from Great Britain.
In 1930 he launched a mass protest against the British salt tax, including civil disobedience activities such as leading the Salt March to the Arabian Sea where they could make their own salt by evaporating sea water.
That march galvanized opposition to Britain’s rule over India, and it resulted in Gandhi and some 60,000 others being arrested.
In 1931 Gandhi was released from imprisonment and allowed to attend the Round Table Conference on India in London as the sole representative of the Indian National Congress.
Earlier that year, Winston Churchill had referred to Gandhi as a seditious, half-naked fakir. (According to Merriam-Webster second definition, a fakir is “an itinerant Hindu ascetic.”
Upon his return to India, and after being jailed and released again, Gandhi continued his work as the leader of the independence movement based on his core value: satyagraha (truth-force), which basically means non-violent resistance toward that which was considered evil.
Here is a picture of Gandhi in 1946 at an All-India Congress committee meeting with Jawaharlal Nehru, who became the first Prime Minister of India the following year. 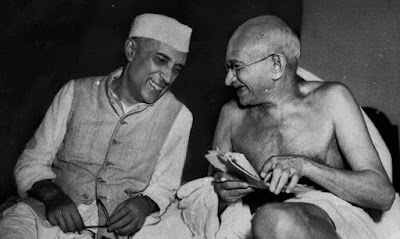 Gandhi’s long, hard, non-violent work led to India gaining independence in 1947.
The Influence on and of Gandhi
Gandhi was a Hindu, and remained so throughout his lifetime, although generally there is little difference between being Indian and being Hindu. But he had great admiration for Jesus Christ and in many ways lived and acted like a follower of Jesus.

A Methodist missionary to India has shared (here) these words he heard Gandhi speak:

I have a great respect for Christianity. I often read the Sermon on the Mount and have gained much from it. I know of no one who has done more for humanity than Jesus. In fact, there is nothing wrong with Christianity, but the trouble is with you Christians. You do not begin to live up to your own teachings.

As is widely known, Martin Luther King, Jr., was influenced by Gandhi and his practice of satyagraha.


There are many reasons to praise Gandhi, who, like King just 20 years later, was tragically assassinated in spite of his non-violent activities for truth and justice.
Posted by LKSeat at 5:29 AM