We all know who POTUS #45 is, but do you know who was #25? That would be William McKinley, who was born 175 years ago this month—and who became President 121 years ago, in March 1897.
Learning about McKinley
June and I have the good fortune of living only about 12 miles from the Truman Presidential Library and fairly often are able to hear talks given there by guest lecturers. Such was the case last fall when were able to hear author Robert Merry talk about his new book President McKinley, Architect of the American Century.
Perhaps like many of you, I have never known (or cared?) much about McKinley, except that he was the third President to be assassinated in office (all within the space of 36 years!).
Even five years ago when I posted a blog article titled “Remember the Maine,” I didn’t mention the President when that event took place 120 years ago on February 15, 1898.
Merry titled the Introduction to his book, “The Mystery of William McKinley,” and it is somewhat mysterious that McKinley has not been more highly regarded—especially if, as Merry thinks, he can rightly be considered to be the “architect of the American century.”
Achievements of McKinley
While there are certainly other aspects of McKinley’s presidency that are noteworthy, none are more significant that the expansion of American power during his time in office. In fact, the events of 1898 initiated the beginning of what some call the American Empire.
The Spanish-American War began in April 1898 and ended with the Treaty of Paris, signed on December 10 of that year. Merry summarizes the benefits received: “The president [McKinley] got all he wanted: the Philippines, Puerto Rico, Guam, Spain out of Cuba and the Caribbean, with no debt assumed by the United States” (p. 340).
It was also in July 1898 that the U.S. annexed the Republic of Hawaii, which had formerly been known as the Sandwich Islands.
McKinley was serving “Uncle Sam” new territory for his enjoyment, as is expressed by the following cartoon by Boz in the May 28, 1898, issue of the Boston Globe newspaper. (The cartoonist could see which way the winds were blowing.) 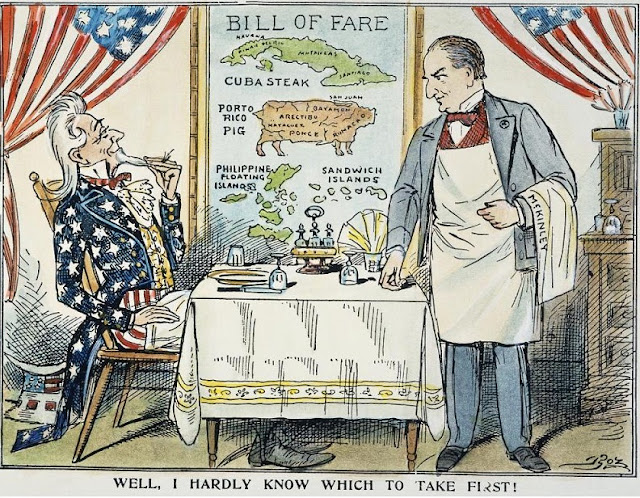 By the end of 1898 it looked as if the U.S. had, indeed, become an empire, which Merry recognized by titling his 21st chapter “Empire.”
Questioning McKinley’s Achievements
There was strong opposition, however, to what seemed to be the surge of American imperialism under McKinley. On June 15, 1898, the Anti-Imperialist League was formed especially to fight U.S. annexation of the Philippines. It included among its members such notables as Andrew Carnegie, Mrk Twain, and William James.
It was in that context that James, the eminent American philosopher and Harvard professor, exclaimed, “God damn the U.S. for its vile conduct in the Philippine Isles” (cited in Howard Zinn, A People’s History of the United States, p. 307).
(With reference to his much-criticized remarks back in 2008, Rev. Jeremiah Wright, Barack Obama’s former pastor, said he was quoting James. See my brief article about that here.)
The U.S. relinquished its sovereignty over the Philippines in 1946. Then in 1959 statehood was given to Hawaii, even though it is not in North America.
Guam and Puerto Rico still remain U.S. territories and their inhabitants are citizens of the U.S.—although they seem to be treated as “second-class” citizens as the insufficient response to last year’s hurricane destruction of Puerto Rico has shown.


In recent decades the American “Empire” has been seen primarily in its global leadership and international influence, positions now being considerably weakened because of the words and actions of #45.
Posted by LKSeat at 5:40 AM