Can There Be a Radiant Center in Politics?

“Republicans are moving further Right and Democrats are moving further Left. NEITHER situation makes for a unified country.” That comment on my Jan. 25 blog article was posted by Easel Roberts, a Thinking Friend (TF) with whom I used to attend the same Sunday School class here in Liberty but who now lives in South Carolina.
COMPELLING COMMENTS
Easel is a P.E. (Professional Engineer) who works at GE Renewable Energy, and I value his viewpoint, partly because few of my TFs have the educational background and occupational experience that he has.
In a follow-up email, Easel wrote,
“It is, as if, some cosmic force (media, Facebook, politics, social issues) has put us all on a kid’s merry-go-round. The only answer is ‘I’m right and you are wrong’ and vice versa. There is no meaningful dialogue or debate.
“The ‘forces’ are making the merry-go-round go faster and faster. We are fighting desperately to hold on for dear life to keep from being thrown off. IF we could only get to the center, we could relax because there would be no forces throwing us toward the edge.
“While certainly not human nature, we need to lead people to the middle OR . . . we will destroy the country by trying to WIN. If Christians, and by extension the church, cannot figure this out, then we truly have no hope.” 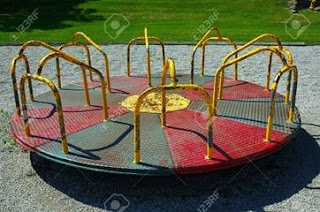 AN AFFIRMING RESPONSE
In my response to Easel’s thought-provoking comments, I said, “In my book The Limits of Liberalism I wrote about the need for a ‘radiant center’ regarding theological issues. Perhaps that is one of the biggest needs politically also.”
Finding such a radiant center, however, is probably more difficult, more elusive, and more unlikely in the political world than in the theological world. Yet perhaps that is a goal, an intention, an aspiration that needs to be given the highest priority.
Over the last couple of weeks I have heard mention of a possible civil war ensuing in the near future. Finding the center is not only essential for Christians (the church) as Easel emphasized, it is essential for the United States as a whole.
THE PERSISTING PROBLEM
The ongoing, persistent problem, though, is this: How could a radiant center ever be formed?
For example, what would a radiant center look like in a society where some people consider all abortion the same as murder and others see abortion as an essential part of “women’s reproductive rights”?
What would a radiant center look like in a society where some people consider same-sex marriage as an abomination contrary to the clear teachings of the Bible and others see it as a necessary part of some people’s civil rights?
What would a radiant center look like in a society where some people consider “illegal aliens,” visitors from Near Eastern countries, and refugees from Syria to be serious threats to the safety and wellbeing of U.S. citizens and others see the welcoming of strangers and suffering people to be an indispensable expression of Christian love or even of human decency?
Perhaps there is no center position on such issues. Perhaps it illusionary to think that there could be a center embracing both “pro-life” and “pro-choice”—although there are those now who are emphasizing that “pro-life” means far more than anti-abortion, and most on the left can agree with that emphasis.


Maybe, though, with a constant emphasis on such things as freedom with responsibility, full acceptance of those who are “different,” justice, compassion, etc., there can gradually be, even in politics, the growth and expansion of a much-needed radiant center.
Posted by LKSeat at 5:27 AM