Most of us who were Southern Baptists 50 years ago, and earlier, were very familiar with what were usually called revival meetings. Perhaps that was especially true in rural and small town churches, and it was probably much the same in several other denominations as well.
In my boyhood and early ministry, “revivals” were primarily evangelistic meetings, although they also emphasized renewed Christian commitment among those who were already believers. An outside preacher was usually brought in for the revival services, which often lasted eight days and sometimes longer.
“The Revival”
There is, however, a different sort of revival now taking place. It is a “national tour” being conducted under the name “The Revival: Time for a Moral Revolution of Values.” Currently, “The Revival” is scheduled for 20 stops between April 2016 and January 2017. It will be in Kansas City on Sept. 19, the 10th stop of the tour, and in Ferguson/Florissant, Missouri, on Sept. 27.
(For those of you in the Kansas City area, here is the link to information about The Revival to be at St. James United Methodist Church next Mon. evening. For those of you not in or from the Kansas City area, St. James is the church where U.S. Representative Emanuel Cleaver II was the previous pastor and where Rep. Cleaver’s son serves as pastor now.)
The other speakers at The Revival are Traci Blackmon, pastor of Christ the King United Church in Christ in Florissant, Mo.; Simone Campbell of “Nuns on the Bus” fame; and James Forbes, emeritus pastor of the historic Riverside Church in New York City.
Rev. William Barber
Although Rev. William Barber, Jr., the leader of The Revival claims that it is neither Democratic nor Republican, liberal nor conservative, some of you likely saw him give a stirring 10-minute speech at the Democratic National Convention on July 28. (Here is the link to a YouTube video of that powerful talk.) 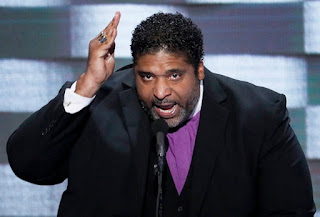 Since 1993 Barber (b. 1963) has been pastor of the Greenleaf Christian Church (Disciples of Christ) in Goldsboro, North Carolina. He has also been the head of the North Carolina NAACP since 2006. Not long after assuming the latter position, he began the Forward Together Movement, mainly in opposition to Tea Party activities in N.C.
Barber has also been the main leader of the Moral Monday Movement, a grassroots movement that began in 2013. That was mainly a series of peaceful protests against the politics of the N.C. government and the new governor, Pat McCrory. (I wrote briefly about “Moral Mondays” in a 9/30/13 article.)
From the beginning, among other dissatisfactions, Moral Monday protesters were especially unhappy with new restrictions in voting rights, the cutting of social programs, changes in tax legislation, and the repeal of the Racial Justice Act.
Higher Ground Moral Declaration
Barber has authored a book about the Moral Monday rallies. It was published in 2014 under the title Forward Together: A Moral Message for the Nation. I have enjoyed reading it this month.
More recently Barber has initiated the Call to Action for a Moral Agenda, asking people to sign the Higher Ground Moral Declaration (which I have done, and which you also could sign after opening this link). The Revival is part of that initiative seeking to redefine morality in American politics.
According to their press release, The Revival national tour “challenges leaders of faith and moral courage to be more vocally opposed to harmful policies that disproportionately impact the poor, people who are ill, children, immigrants, communities of color, and religious minorities."
That sounds good and important to me.