It is sobering to visit Cemetery Hill in Gettysburg, Pennsylvania—as I did for the first time last week.
Cemetery Hill is the name of the place where a private cemetery was started in 1854. Nine years later, from July 1-3, 1863, it became the site of one of the most important battles of the Civil War.
That was also the place where in November of that year President Lincoln delivered what we know as the Gettysburg Address, a speech that took about two minutes. In the picture below you see June looking at the bust of Lincoln. His entire talk is engraved on the bronze plaque behind her. 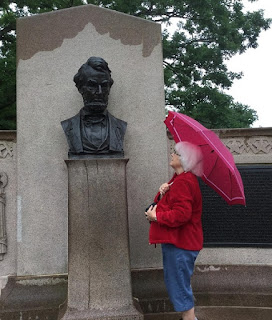 In some of the most widely quoted words from Gettysburg Address, Lincoln expressed his strong desire that “the nation shall have a new birth of freedom, and that government of the people, by the people, for the people, shall not perish from the earth.”
Those words are generally taken as a clear call for democracy—and surely that is correct. But there is almost no one in this country, regardless of political party, who does not advocate or support democracy.
For some reason, though, more than one speaker at the meeting of the Faith and Freedom Coalition meeting (that I wrote about here) thought it important to cite Lincoln’s words—and to emphasize that he was a Republican.
Some say that Lincoln was making a clarion call for equality among all people of the nation. Those words were spoken after the Emancipation Proclamation was issued on Jan. 1, 1863. Still, that proclamation only freed slaves in the Confederate States.
Moreover, it would be another 57 years before women of any color could participate equally in the democratic process by voting.
Others may point out that a government “for the people” is one that actively promotes the “general Welfare,” as stated in the preamble of the Constitution.
That, though, seems to be at odds with a major emphasis of the Republican Party since the days of President Reagan, who emphasized that “government is not the solution to our problem; government is the problem.”
It is somewhat puzzling that in his inaugural address of 1981, Reagan went on to say, “From time to time we’ve been tempted to believe that society has become too complex to be managed by self-rule, that government by an elite group is superior to government for, by, and of the people.”
Republicans now repeatedly talk about smaller government, states’ rights, and decisions made locally rather than in Washington.
Lincoln’s words, though, were spoken in the midst of the Civil War, fought first of all to keep the Union together. He was surely talking about a federal government “for, by, and of the people.”
If it had been left up to the individual states, or to local governments, how long would it have taken for the slaves of the South to be freed? Another 50 years? Another 100 years? Perhaps.
As it was, it took almost a hundred years for the Civil Rights Act to be passed in 1964 and the Voting Rights Act to be passed in 1965—and those two extremely important pieces of legislation were enacted by a Democratic Congress and signed by a Democratic President.
Basic positions of the Democratic and Republican parties in the 1960s were almost completely reversed from those of the 1860s—and people who fail to note that change misconstrue American history.


So, I want a federal government of, by, and for the people—just like Lincoln did.
Posted by LKSeat at 5:42 AM