When I was in Washington, D.C., this month, once again I saw many license plates with the words “taxation without representation” on them. The newest plates with those words look like this: 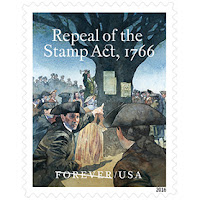 Have you seen the new U.S. postage stamps that were issued on May 29? They commemorate the 250th anniversary of the repeal of the Stamp Act in 1766. These new “forever” stamps are sold only as souvenir sheets of 10 stamps and are $4.70.
The USPS website explains: “The commemorative stamp art depicts a crowd gathered around a ‘liberty tree’ to celebrate the repeal of the Stamp Act.” Such “liberty trees” were “found in a number of cities throughout the colonies, and were popular gathering spots for community meetings, political discussions, celebrations and more.”
The new British legislation required American colonists to pay a tax on a wide array of paper materials, such as newspapers, legal documents, mortgages, contracts—and even playing cards. A revenue stamp embossed on those papers indicated payment of the tax.
Many colonists were not happy with the new tax, to say the least. Accordingly, the USPS website also says that the Stamp Act, which was passed by the British Parliament in March 1765, “proved historic in galvanizing and uniting the American colonies, setting them on a path toward independence.”
The first chapter of The Beginnings of the American Revolution (1910) by Ellen Chase is sub-titled “Stamp Act Causes Riot,” and then the second chapter is “The Colonies Unite Successfully for Repeal.” Thus, actions resulting from the negative reaction toward the Stamp Act was a major impetus toward the colonists’ declaration of independence from Great Britain on July 4, 1776.
The tax levied by the Stamp Act was not exorbitant; it was the principle that rankled the colonists. As Chase says, “The exception was not taken to the tax in itself. . . . The objections rose solely from Parliament’s assumption of supremacy in the Colonies’ internal affairs” (p. 23).
For a long time after independence from Great Britain, however, U.S. citizens mostly had representation without taxation. There was an excise tax placed on whiskey in 1791—but that led to the Whiskey Rebellion in 1794.
The first personal income tax resulted from the Revenue Act signed into law by President Lincoln in August 1861. He who wanted government “of the people, by the people, for the people” needed to raise money to pay for the Civil War activities of the Union.
The first permanent income tax in this country, though, was not established until 1913—and the first general sales tax not until 1930.
In D.C. now, though, there is taxation but no representation on the federal level. Statehood for the District is one possible solution to the problem.


However, the “party of Lincoln” that freed the slaves in spite of strong objection by the Democratic Party then does not want to grant statehood now to a territory that would most probably send Democrats to the U.S. Congress. As I wrote earlier, the Parties have switched positions.
Posted by LKSeat at 5:30 AM