People don’t talk or think much about sin anymore, it seems—except for the notable exception of many evangelical Christians. Even more than forty years ago the noted psychiatrist Karl Menninger wrote a book titled Whatever Became of Sin? (1973).
That is also the title of a subsection in my book The Limits of Liberalism (2010), just before a longer section on the widely misunderstood and misinterpreted doctrine of “original sin.” In “polite company” the word “sin” is seldom mentioned—and “original sin” is usually mentioned only in derision.


What has been called the doctrine of original sin was based, of course, on the third chapter of Genesis. In that theological/mythical story, the serpent said the following to Eve about the forbidden fruit: “God knows that when you eat of it your eyes will be opened, and you will be like God, knowing good and evil.” 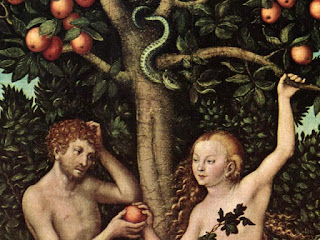 
That is the way most sin is. We commit sin because at the time such actions seem desirable, delightful, and good—at least for us (and who else do we usually think about?).


I started thinking again about this matter after reading Thinking Friend Fred Heeren’s recent comment: “How could we be honorable in our war killing unless these people deserved to die? . . . We need to know these were ‘bad’ people and be ‘glad they were killed’ in order to justify our wars.”
Yes, in war “the enemy” always has to be demonized, for how else would soldiers be able to kill them? Probably few Americans realize, though, that to those the U.S. engages in war, Americans are the enemy.
While it is easy, and probably correct, to label Hitler or Tojo as evil or extremely sinful, what about those who fought under their command? Most of them were conscripted into service—or volunteered in response to the propaganda (brainwashing) they were subjected to.
Also, Japan and Germany were both under severe economic pressures during the 1930s. In addition, Germans were still chafing under harsh treaties from the end of WWI and many Japanese were greatly irritated by what they considered racial and/or cultural affronts.
And what about the people of the South in the U.S. in the 1860s? Most of the whites there were simply trying to maintain their way of life and economic stability. In resisting the demands of the North, they were mostly doing what they thought was good, right, necessary.
What most of us call the Civil War has long been called something different in the South. For example, in 2012, the year before he became president of the NRA, Jim Porter referred to the Civil War as the War of Northern Aggression.`
In the book I introduced in my previous blog article, Bartoletti states that The Clansman (1905), a novel by Baptist minister Thomas Dixon, portrayed the Klan as noble white-robed knights who saved white civilization from racial violence in the South (p. 147).
Yes, all who are “sinners” do things that they think are good, right, and necessary. So maybe we should act with “malice toward none, with charity for all.”
Posted by LKSeat at 5:05 AM