Are There Bible Prophecies about Contemporary Events?

"Gaza will writhe in agony.”
“Gaza shall be abandoned.”
These are two ominous prophecies about Gaza found in the Old Testament (in Zechariah 9:5 and Zephaniah 2:4). Some claim that what has happened in Gaza over the past ten years, or last year, was a fulfillment of those prophecies.
But those who make such claims disregard what else is found in those two verses. Zechariah 9:5 also says, “Ashkelon won’t be inhabited.” And Zephaniah 2:4 declares, “. . . and Ashkelon [will certainly be] destroyed.”
As I wrote in my previous blog article, on the way to the Gaza Strip last month I passed through the outskirts of Ashkelon. While there was some rather minimal damage from Hamas-fired rockets last summer, it still seems to be a thriving city. Here is a picture of Ashkelon used by Reuters this month: 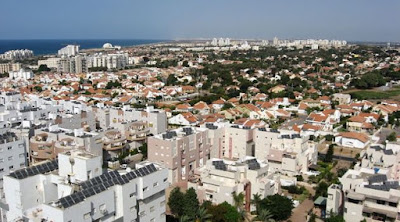 The prophecies mentioned above were fulfilled long, long ago. It is not in the least legitimate to see the destruction of modern Gaza as fulfillment of Biblical prophecies—or as military action that should be supported by the U.S.
Those who claim that biblical prophecies are being fulfilled at the present time are very selective in the verses they use and they tend to completely ignore the historical context of when and where the words were first spoken or written.
Earlier this month a friend sent me an email with the words “The Most Disturbing Documentary of 2015” on the subject line. It was a link to a video, which you can access here. (The transcript and some pictures are found at SurviveTheEndDays.com/tl/.)
The “documentary” begins with these words:
. . . Obama and the leaders of our church have a secret sinister pact to hide from the public the most terrible warning encrypted inside our Holy Bible . . . . because according to the final chapters of the Bible Obama will not finish his second term. He is the 44th and last President of the US.
Based on Daniel 11:36-40, the video asserts, “Vladimir Putin is undoubtedly the king of the north that will guide Russia in the end times.” Further, President Obama, “was born either in Hawaii or Kenya,” south of Jerusalem. That and other clues “prove that Obama is the king of the south as the prophecies foretold.” And these two kings will fight it out before January 2017.
But just as I predicted that the world was not going to end in May 2011 (see here), I now predict that the prophecy about the demise of the U.S. before the next presidential Inauguration Day is mistaken. (If I am wrong, send me an email any time after Jan. 20, 2017.)
Well, this video/transcript and many similar Bible prophesies that can be found on Internet might well be the work of what some people might call the “crazies.” But some Christian authors and politicians who are more “mainstream” hold similar views.
Joel Rosenberg, a New York Times bestselling author of ten novels (whom I referred to in the 5/2011 article), has long linked Iran to end-of-the-world prophecies. It is noteworthy that he has influenced some national politicians. In March of last year Rosenberg and Rick Santorum co-authored a piece about Iran for CNN.com.
Tony Perkins, head of Family Research Council and an ardent supporter of Israel, has announced that FRC will be conducting a tour of Israel this fall, and it will include Rosenberg, Santorum, and Bobby Jindal.
But here is a word to the wise: beware of linking Biblical prophecies to contemporary events.
Posted by LKSeat at 5:28 AM