Growing up in rural northwest Missouri, I didn’t have much opportunity to know people who belonged to the Catholic Church.
And then during my years in two Baptist colleges and The Southern Baptist Theological Seminary, that didn’t afford much possibility of getting to know Catholics, either.
Actually, as I think back, I guess my first Catholic friend was Zénon Yelle, a Canadian priest who lived in the same city in Japan. In the 1970s he became a member of a book discussion group that June and I attended monthly.
Fr. Yelle was a thoughtful man and a good scholar, and getting to know him helped me gain a more positive idea about Catholics.
It was also probably in the 1970s that I first became aware of, and then read a book by, Thomas Merton, an outstanding Catholic thinker and prolific author who was born 100 years ago tomorrow, on January 31, 1915 (exactly six weeks before my father). 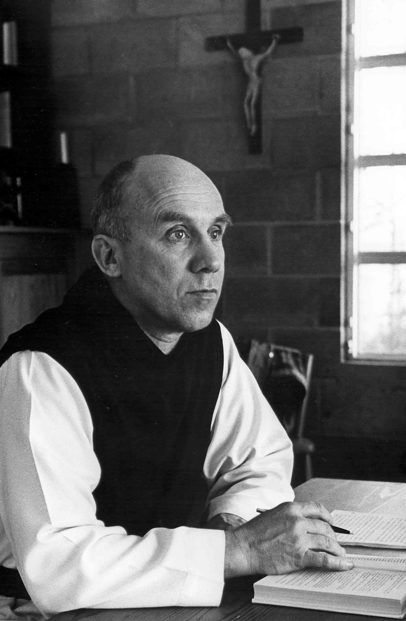 The first of Merton’s more than 70 books that I read was “New Seeds of Contemplation” (1962), and I have read it a time or two since. And then a few years ago I read “The Seven Storey Mountain” (1948), his highly acclaimed autobiography.
Partly in honor of his memory, this month I have read Merton’s “No Man Is an Island” (1955), one of his most widely-read books on what he calls “the spiritual life.” These books are quite beneficial for Protestants as well as Catholics.
In 1941 Merton became a Trappist monk in the Abbey of Gethsemani near Bardstown, Kentucky. That was his home for the next 27 years before his untimely death.
Dr. E. Glenn Hinson was one of my teachers at Southern Seminary in the spring semester of 1960—and after all these years I still exchange emails with him regularly.
In the fall of 1960 Dr. Hinson (b. 1931) began taking students to Gethsemani. Unfortunately, I wasn’t in any of his classes that did that, so I never had the privilege of meeting Merton or hearing him speak—or of learning more about Catholics then.
But the contact with Merton was quite meaningful to the seminary students who did go to Gethsemani with Dr. Hinson, and in a recent email Dr. Hinson wrote, “Merton had a very profound impact on my life and ministry.”
Through the years, Merton became a strong proponent of interfaith dialogue, engaging in deep discussions with Asian spiritual figures, including the Dalai Lama, the Japanese writer D.T. Suzuki, and the Vietnamese monk Thich Nhat Hanh.
In December 1968, Merton went to Thailand to attend an interfaith conference between Catholic and non-Christian monks. From there he intended to go on to Japan to learn more about Zen Buddhism. After speaking at the conference in Thailand, though, he suddenly died.
It is generally concluded that while stepping out of his bath, he was accidentally electrocuted by an electric fan. It was a tragic loss to the religious world and to all who knew him.
It is impossible to know how much more good he could have done if he had lived 39 more years as my father did.
One chapter in “New Seeds of Contemplation” is titled “The Root of War is Fear.” Several times I have quoted the concluding words of that chapter, and they are words worth remembering and worth considering over and over again:

If you love peace, then hate injustice, hate tyranny, hate greed—but hate these things in yourself, not in another (p. 122).
Posted by LKSeat at 5:27 AM