Thankful for This Passionate Advocate for Children

During this Thanksgiving week, I am thankful for many things and for many people—such Marian Wright Edelman, a passionate advocate for children over the last 40 years.
Marian Wright was born in South Carolina in 1939. Her father, a Baptist minister, died when she was 14. His last words were, “Don’t let anything get in the way of your education.” She didn’t.
Marian went on to earn a law degree at Yale and then in 1964 became the first African-American woman admitted to the Mississippi Bar. That year she was very active in civil rights activities in Mississippi, leading in what came to be known as Freedom Summer.
In 1968 Marian married Peter Edelman, a lawyer from Minnesota. They made an interesting couple: she a black Baptist, he a white Jew. 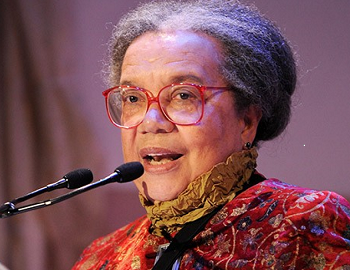 The Edelmans have three grown sons, including Jonah (b. 1970), their second son, who has a Ph.D. from Oxford and is the co-founder and CEO of Stand for Children, an education reform organization.
Ms. Edelman started the Children’s Defense Fund in 1973, and it has become the nation’s strongest voice for children and families. Here is CDF’s mission statement:

The Children’s Defense Fund Leave No Child Behind mission is to ensure every child a Healthy Start, a Head Start, a Fair Start, a Safe Start and a Moral Start in life and successful passage to adulthood with the help of caring families and communities.

Hillary Rodham was one of the first staff lawyers for CDF, and then after she married Bill Clinton in 1975 she was the Chair of its Board of Directors from 1986-92.
Ms. Edelman was one of the featured speakers at the 2008 New Baptist Covenant gathering in Atlanta. I heard that talk and was much impressed by her—and have been on CDF’s mailing list ever since.
I also enjoyed reading some of her latest book, The Sea Is So Wide and My Boat Is So Small: Charting a Course for the Next Generation (2008).
One of CDF’s ongoing activities has been sponsoring summertime Freedom Schools across the country. Since 1995, more than 100,000 K-12 children have had a CDF Freedom Schools experience. (Here is the link to CDF’s website.)
The church June and I are members of has sponsored a Freedom School for six weeks each summer for several years now. It is a considerable expense and takes a lot of work, but it is a wonderful ministry to the children in the church’s neighborhood, the majority of whom are Hispanic and African-American.
This year for the first time I read a story to the nearly 100 children enrolled in our Freedom School, and I was impressed by the children’s attention and to the way the leaders were teaching/leading them.
The first Freedom Schools were held in Mississippi as part of the 1964 Freedom Summer civil rights activities mentioned above. So this was the 50th anniversary year—as you can see from the picture I took the morning I was at our church’s school in July. 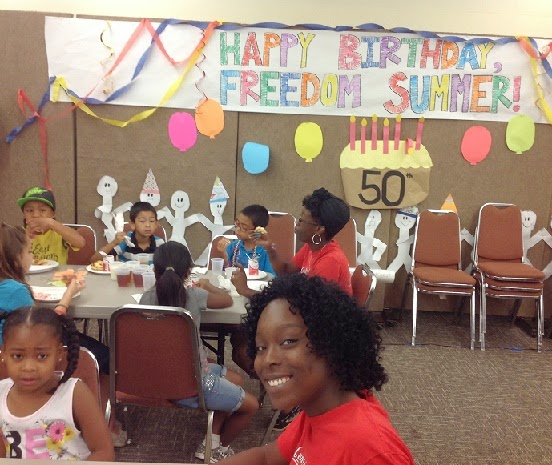 This year a scholarly book honoring Ms. Edelman and the Children’s Defense Fund was published under the title “Improving the Odds for America’s Children.” On the back cover are these words by Hillary Clinton:

Please join me in giving thanks for Marian Wright Edelman and her indefatigable advocacy for the nation’s children.
Posted by LKSeat at 5:31 AM