Dr. Wayne E. Oates was probably the wisest teacher I ever sat under—and since I was a full time student for 22 years, from 1944 to 1966, I had a lot of teachers.
Oates was born into a poor South Carolina family in 1917, and he passed away 15 years ago tomorrow, on Oct. 21, 1999. Abandoned by his father in infancy, young Wayne was brought up by his grandmother and sister while his mother supported them by working in a cotton mill.
At the age of fourteen he was one of a small number of impoverished boys selected to serve as a page in the U.S. House of Representatives. Stimulated by that experience, he became the first of his family to go to college.
Oates went on to earn a doctor’s degree in the psychology of religion and then taught at The Southern Baptist Theological Seminary (SBTS) from 1947 to 1974 and at the University of Louisville Medical School after that.
When I was in his pastoral counseling class at SBTS, I made an appointment to talk with Dr. Oates about a troublesome matter in the church I was serving as pastor. After listening carefully to my explanation of the problem, he leaned toward me and said, “Brother Seat, there are some situations we just can’t change. All we can do is learn from them.”
Wise words!
Several years later, in 1971, Dr. Oates wrote a book titled “Confessions of a Workaholic.” He begins, “Workaholism is a word which I have invented. It is not in your dictionary.”
But now “workaholic” is in most dictionaries. In a brief article about his death, the New York Times reported that Oates’s 1971 book resulted in “workaholic” being added “to the American lexicon; the Oxford English Dictionary credits him with inventing it.”
At the age of 66, Dr. Oates wrote an autobiographical book titled “The Struggle to Be Free.” The first chapter is about his boyhood and the struggle to be free of poverty. 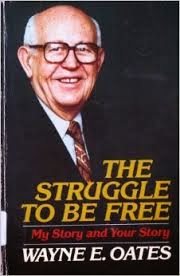 Next he writes about the struggle to be free from a feeling of inferiority. “Poverty,” he contends, “leaves you with wounds to your self-esteem” (p. 29).
“To Be Free from the Slavery of Overcommitment” is the title of the seventh chapter, and there Dr. Oates tells how he wrote the book about workaholism because of his own struggle with an overcommitment to work.”
He came to realize that part of the reason for that was due to the poverty he had experienced as a boy. He writes, “I do not think that economics determines our destiny. I do think that economics shapes our thoughts and decisions far more than the pious people of the earth know or are willing to admit” (p. 136).
Throughout his lifetime, Dr. Oates wrote 57 books—far more than he probably would have written if he had not been a workaholic. (In some cases we can thank God for workaholics!)
Those books have been greatly beneficial not only to his many students and to other teachers in the field of counseling, but also to many people in the general public who have been able to learn from the wisdom shared in his books.
Please join me in thanking God for wise teachers—and even for workaholics like Dr. Oates.
Posted by LKSeat at 5:27 AM