Sadako and the Thousand Cranes

Sadako Sasaki was born in January 1943 in Hiroshima, Japan. But 1943 was not a good time to be born in Japan, and Hiroshima was not a good place to be born.
Sixty-nine years ago tomorrow, on August 6, 1945, the atomic bomb was dropped on the city of Hiroshima. Although Sadako lived not far from the center of the explosion, she was not visibly injured.
Just before her 12th birthday, though, she began to have symptoms indicating that something was wrong. It turned out that she had leukemia, or “atomic bomb disease” as it was often referred to in Japan then.
Most of you know about the Japanese art of paper folding, which the Japanese call origami. In the late 1700s, one of the first books on origami published in Japan was titled “How to Fold 1,000 Cranes.”
The crane has long been used in Asian cultures as a symbol for good health and longevity. According to Japanese tradition, anyone with the patience and commitment to fold 1,000 paper cranes will be granted their most desired wish.
After Sadako came down with leukemia, her good friend Chizuko came to her hospital room with a piece of gold-colored paper and scissors.
Reminding Sadako of the legend of the thousand cranes, Chizuko folded the first of what she hoped would become a string of 1,000 paper cranes that would lead to Sadako’s healing.
According to Eleanor Coerr’s popular book “Sadako and the Thousand Paper Cranes” (1977), at the time of her death on Oct. 25, 1955, only 644 paper cranes had been finished. The lack of paper is one reason more had not been folded.
Her classmates folded 356 more cranes, making 1,000 that were placed with her in her casket.
Sadako’s friends also dreamed of building a monument to her and for all the children who were killed by the atomic bomb.
Their dream became a reality when in 1958 a statue of Sadako holding a golden crane was unveiled in Hiroshima Peace Park. These words are engraved on the base of that statue:
This is our cry, this is our prayer; peace in the world.
Every year hundreds of thousands of paper cranes are placed around Sakako’s memorial statue on August 6, which is widely observed in Japan as Peace Day. 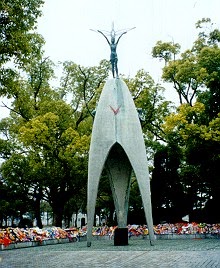 Sadako wrote on the wings of one of her paper cranes, “I write peace on your wings, and you will fly all over the world.”
In the library at the church where June and I are members, there is a painting of a paper crane with those words cited at the bottom. This year people at our church also are folding 1,000 paper cranes and will send them to Hiroshima to be placed by Sadako’s statue in the Peace Park.
Even though Sadako’s wish to get well didn’t come true, her story has become known around the world.
This evening in Santa Barbara, Calif., the Nuclear Age Peace Age Foundation will host the 20th annual Sadako Peace Day with poetry, music, and reflections commemorating the story of Sadako. Their slogan this year is a good one: Reflecting on the past to assure a more peaceful future.
In 2002, Naomi Takeuchi, a Japanese-American woman, founded a business consulting organization she named 1000 Cranes. One page on its attractive website tells “The 1000 Cranes Legend.”
That page concludes by saying that Sadako’s story “stands as an inspiration to all, and a testament to the continued power of the paper crane as a compelling symbol for hope, love, honor, and peace.”
And so it does.
Posted by LKSeat at 5:31 AM