Charity is Not Enough

Right now, on June 9-10, Bread for the World is holding its 2014 National Gathering as well as its 40th anniversary celebration.
Most of you are probably familiar with this humanitarian organization. Bread for the World is a non-partisan, Christian citizens’ movement in the United States. Its goal is to end hunger.
Rather than feeding the hungry directly, however, it describes itself as a collective Christian voice urging the nation’s decision makers to end hunger at home and abroad. 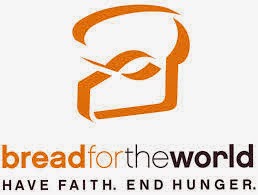 Bread for the World was launched in 1974 under the leadership of Art Simon (b. 1930), a Lutheran pastor in New York City. From 1985 to 1997 his older brother, Paul Simon (1928-2003), was Democratic U.S. Senator from Illinois.
The Simon brothers co-authored “The Politics of World Hunger” the year before Bread for the World was initiated.
David Beckmann, also a Lutheran minister and missionary as well as an economist, has been president of Bread for the World since 1991.
Beckmann and founder Art Simon together wrote “Grace at the Table: Ending Hunger in God’s World” (1999). That book is now 15 years old, so many of the statistics are somewhat dated. But what they write about the problem of, and solution to, worldwide hunger is still true.
Many of us make charitable contributions to organizations that directly help needy people. And giving to such charities is certainly commendable.
But “charity is not enough,” to cite the title of Beckmann and Simon’s 21st chapter.
They emphasize that “effective help for hungry people walks on two legs—the leg of charity and the leg of public policy” (p. 149). Bread for the World is related primarily to the latter.
Decisions made by Congress can and do help hungry people more than the combined efforts of all the charities in the country. On the other hand, some decisions have a negative impact. That is the reason Bread for the World engages in extensive advocacy activities.
Such activities are also called lobbying, a term that often has a negative connotation.
Nonetheless, Bread for the World is up front about what they do. In their appeal for funds they state clearly, “Bread for the World members lobby Congress on behalf of hungry and poor people, so gifts are not tax deductible.”
Yesterday, those who attended the first day of the National Gathering at Georgetown University Hotel and Conference Center spent from 10 a.m. to 5:00 p.m. “worshiping, listening, and learning together.” The theme was “Working Together to End Hunger and Poverty by 2030.”
Today, June 10, is Bread for the World’s “lobby day” for this year. The day will be spent mainly on pre-arranged visits to members of Congress on Capitol Hill. (Here is a link to today’s schedule.)
However, perhaps even charity and advocacy together are not enough. Attention needs to be given also to why people are hungry. This is where things begin to get sticky.
Consider again the oft-cited words of Archbishop Dom Helder Camara of Brazil: “When I give food to the poor they call me a saint. When I ask why the poor have no food, they call me a communist.”
Archbishop Desmond Tutu of South Africa, though, rightly said, “When people were hungry, Jesus didn't say, ‘Now is that political, or social?’ He said, ‘I feed you.’ Because the good news to a hungry person is bread.”
Won’t you join me in supporting the work of Bread for the World?
Posted by LKSeat at 5:27 AM

Labels: Bread for the World, hunger