What about the Keystone Pipeline?

The Keystone Pipeline, in the news for years, is currently a much debated topic in Congress and across the nation. There are strong opinions on both sides of the issue. And like in so many matters, the debate is largely between “conservatives” and “liberals.”
Keystone Pipeline is the name of the oil pipeline system in Canada and the United States. It runs from Alberta, Canada, to refineries in Nebraska, Illinois and the Gulf Coast of Texas.
Three phases of the project are in operation, and the fourth is awaiting U.S. government approval. The latter, and the phase that has been so much in the news recently, is the Keystone XL Pipeline. (“XL” stands for “eXport Limited.”) 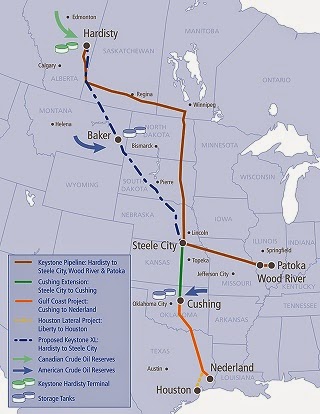 The first two phases were completed in 2010 and 2011 and the third phase in January of this year. Phase 1 included pipes laid from Nebraska across Missouri to Illinois. Many times I saw that construction in the country north of Clay County where I live, but I had no idea it was part of the Keystone Pipeline.


Phase 4 was proposed in 2008. It was approved in Canada (and South Dakota) in 2010, but later that year the Environmental Protection Agency raised serious questions, and in 2011 the Department of State postponed making a decision to approve the new construction.


The main arguments favoring construction of the fourth phase are: (1) The XL Pipeline would create jobs and stimulate the U.S. economy. (2) It would enhance energy security and support energy independence.


Although it is not usually explicitly said, one of the main reasons why many wealthy people (and people beholden to them) support the new pipeline is that it would make them wealthier.


In a related argument, a recent article in Forbes magazine declares, “Keystone XL should be built because we want the private sector to be free to do as it chooses sans government meddling” (5/4/14).


As usual, the conservatives (most Republicans) are on the side of the wealthy and opposed to government regulations and any curbs on “free enterprise.”


Similarly, there are two main reasons for opposing the plans for the fourth phase of the Keystone XL Pipeline. There are mainly environmental concerns, although not directly related:


(1) There is the threat of spills leading to massive contamination of water used for drinking, irrigation, and livestock watering. (2) It would lead to increased greenhouse gases in the atmosphere, resulting in acceleration of global warming.


Also as usual, the liberals (most Democrats) are on the side of protecting the environment and combating global warming—even though the Forbes article referred to environmentalists as still being “caught up in a global warming delusion.”


In the short haul, building the XL Pipeline would likely be beneficial to the country. But in thinking of the future, it is most likely to be unwise. Unfortunately, most politicians feel the necessity for short-term, current-benefit thinking.


The President is caught between the long-range benefits of disapproving and the short-term benefits of approving. My guess is he wants to prohibit the XL Pipeline, which would be good for the country in the long haul, but he realizes it would be detrimental to his party this year.


That, most likely, is why he keeps kicking the can down the road, as they say.


But I sincerely hope the President will keep listening to the voices of such people as Bill McKibben and the 350.org organization. They are representative of those who are seeking the long term well-being of the planet.
Posted by LKSeat at 5:32 AM