In Admiration of Malala

Last month Time magazine issued their new list of the 100 most influential people in the world. The youngest person on that list was Malala Yousafzai, who was born in July 1997. 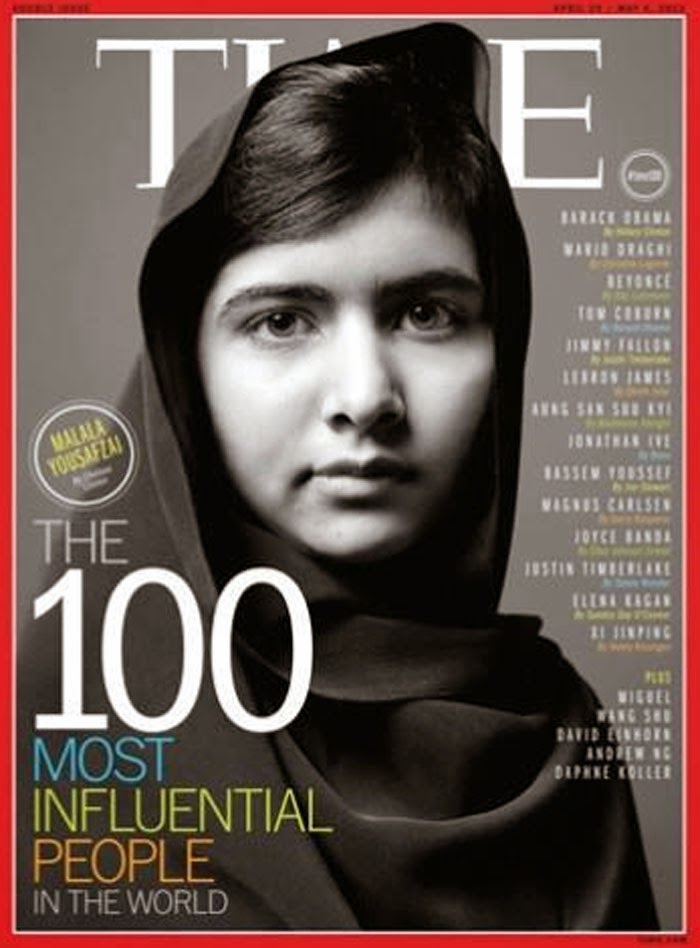 You remember Malala: she is the Pakistani girl shot in the head by a Taliban terrorist in October 2012. The short 4/23 Time article about Malala was written by Gabrielle Giffords, the former congresswoman from Arizona who, as you also remember, was shot in the head in January 2012.
Giffords begins her article, “Like millions around the world, I draw strength from brave Malala’s example.”
In addition to the recognition by Time, Malala has received many other notable accolades. Last year, for example, she was nominated for the Nobel Peace Prize, the youngest person ever to be nominated for that prestigious honor. She was nominated again in February of this year.
Also, last year on her sixteenth birthday she spoke at the United Nations, calling for worldwide access to education. The U.N. dubbed the event “Malala Day.” It was her first public speech since the attack on her in 10/12. It was a great speech, which you can listen to here.
Born in the Swat Valley of northwest Pakistan, Malala’s story is appealingly told in her book “I Am Malala: The Girl Who Stood Up for Education and Was Shot by the Taliban.” It was published in October of last year and soon was near the top of the bestselling non-fiction books.
Next Wednesday is the monthly meeting of the local group known as Vital Conversations. June and I are looking forward to the discussion of “I am Malala.” It is a fascinating book, very well written with the help of Christiana Lamb, an award-winning British journalist.
Malala is an amazing young woman—and she has an amazing father. Reading the book not only greatly increased my appreciation for her, but for her father as well.
In 1996 Ziauddin Yousafzai (b. 1969), Malala’s father, founded the Khushal School (for both girls and boys). His progressive ideas, and wholehearted support of his daughter, influenced Malala significantly. Of course, he suffered greatly after the attempt on her life, thinking that he is the one who led her into harm’s way.
Malala in many ways seems to be a devout Muslim. However, she is also quite critical of not only Islamists (Muslim fundamentalists) but also of some traditional aspects of Islam—especially the traditional ways women were/are treated/mistreated.
Her criticism of Islamist treatment of women is similar to the way many Christian feminists, including yours truly, are critical of much of the traditional discounting of women in Christianity.
Malala’s main emphasis through the years—from the time she was eleven she was writing (speaking) a blog for BBC Urdu—has been education for girls. In her book, Malala writes, “I don't want to be thought of as the ‘girl who was shot by the Taliban’ but the ‘girl who fought for education.’ This is the cause to which I want to devote my life.”
This week Malala has made appeals for the release of the Nigerian schoolgirls who have been abducted by Boko Haram. That appeal was on Time’s website, found here. She speaks out against the militant Muslims and for the Christian girls.
In her book Malala also quotes the well-known words of the Christian pastor Martin Niemöller.
Traditionalists/fundamentalists will continue to oppose Malala, but her outspoken words/actions for gender equality and for interfaith respect are surely on the right side of history. And I greatly admire what she has said and done.
Posted by LKSeat at 5:31 AM