One winter, after June and I had visited my “snowbird” parents in the Rio Grande Valley in Texas, we set out from there to make the long road trip to the Washington, D.C., area by way of Atlanta.
On our second day of travel, soon after heading east on I-85 in Montgomery, Alabama, we decided to turn off the Interstate and to visit what is now called Dexter Avenue King Memorial Baptist Church.
Martin Luther King, Jr., who was born 85 years ago today, on Jan. 15, 1929, became pastor at Dexter Avenue in 1954 when he was only 25 years old. And it was there that he became a nationally known leader of the Civil Rights movement.
Founded in 1877 as Second Colored Baptist Church, it was long called Dexter Avenue Baptist Church. But in 1978, on the tenth anniversary of King’s assassination, its name was changed again to what it is now. 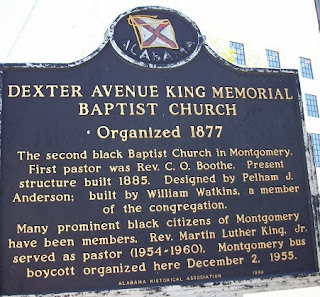 A bookstore in the basement of the church sells King’s books and various souvenir-type merchandise. There we purchased the print of a painting of the Lord’s Supper by African American artist Cornell Barnes.
That remarkable painting is a version of Jesus’ last meal with his disciples—but Jesus is sitting at a table surrounded by black leaders from over the years. 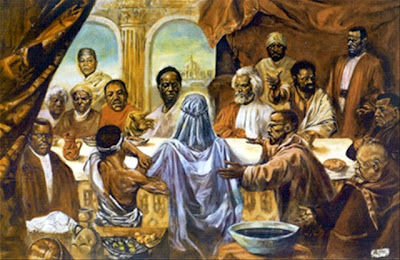 I have also been moved by a similarly provocative painting of the Lord’s Supper by Fritz Eichenberg. In that 1953 painting, Jesus is surrounded at the table by homeless men off the street.
As I wrote previously, I have seen a print of that captivating piece of art on the wall at the Catholic Worker house in Kansas City—and have read that it hangs on the wall of almost every Catholic Worker house in the country.
One of the most impressive contemporary portrayals of the Lord’s Supper is the closing scene of the 1984 movie “Places in the Heart.” That dramatic film tells the story of a Texas widow (Sally Field, who won an Oscar for the part) who struggles valiantly to keep her farm with the help of a blind white man (John Malkovick, who was nominated for an Oscar) and a black man (Danny Glover) during the Great Depression.
Iconic movie critic Roger Ebert wrote about the film’s powerful ending: “The movie's last scene has caused a lot of comment. It is a dreamy, idealistic fantasy in which all the characters in the film—friends and enemies, wives and mistresses, living and dead, black and white—take communion together at a church service.”
In a joint review, a couple of other film critics wrote how in that final Lord’s Supper scene, “the wronged and the wrongdoers, the betrayers and the betrayed, are all together as one. It is an unforgettable cinematic statement about hope.”
I don’t know if King ever saw the Eichenberg painting, but I think he would have liked it, and he surely would have been moved also by Barnes’s work.
But it is a shame that King didn’t live to see “Places in the Heart,” for I think he would have been most favorably impressed with that powerful closing depiction of reconciliation between people of different races and classes.
It is a crying shame, though, that King wasn’t able to continue his valuable work for peace, justice, and reconciliation after 1968 and isn’t here to celebrate his 85th birthday today.
Posted by LKSeat at 5:26 AM