So, what do you think? Could it be that this year, which ends tomorrow, has been the best year in human history? That is what some are saying. Do you agree? Why or why not?


Earlier this month, Zack Beauchamp, a reporter/blogger for ThinkProgress.org, posted an engaging article on its website. The title of his thought-provoking piece is “5 Reasons Why 2013 Was the Best Year in Human History.”
Some of you may have seen Beauchamp’s article, for it has been shared on Facebook more than 20,000 times and referred to in numerous other places.
(A similar article was posted on the website of “The Spectator,” the British weekly conservative magazine that was first published in 1828—in print, not online! It is titled, “Why 2013 has been the best year in human history: The world’s still getting better – here’s the proof.”)
As I write about in my book “The Limits of Liberalism,” many liberals tend to be overly optimistic, and this may be true for Beauchamp. But he also makes some good points.
Briefly, these are the five reasons he gives for contending that this year has been the best in human history:
1)   Fewer people are dying young, and more are living longer.
2)   Fewer people suffer from extreme poverty, and the world is getting happier.
3)   War is becoming rarer and less deadly.
4)   Rates of murder and other violent crimes are in free-fall.
5)   There’s less racism, sexism, and other forms of discrimination in the world.
While some of Beauchamp’s assertions may seem questionable at first blush, he gives considerable supporting evidence. Some of that support is subjective, but longevity rates and murder/violent crime statistics and the like are quite objective—and quite impressive.
Dr. Steven Pinker, a psychology professor at Harvard University, is one of the scholars Beauchamp cites in his article. Canadian Pinker (b. 1954), whom I was first introduced to by an atheist friend, is the author of the captivating book “The Better Angels of Our Nature: Why Violence Has Declined” (2011).
In May of this year, Pinker delivered a speech as one of the prestigious Gifford lectures at Edinburgh University. That talk had the same title as his book, but with a different subtitle: “A History of Violence and Humanity.”
Although Pinker’s lecture is over an hour long, it is well worth listening to—in spite of some questionable assumptions and conclusions.
Of course, there are those who disagree with Beauchamp (and Pinker). Just five days after posting Beauchamp’s article, ThinkProgress.org posted “9 Reasons Why 2013 Was Not the Best Year in Human History.”
Those nine reasons are all related to problems concerning climate change and environmental destruction—but they are primarily problems looming in the future, not ones experienced so much in 2013. 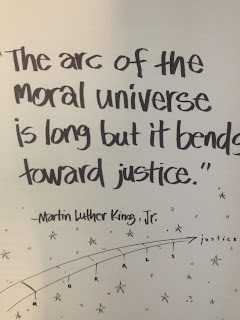 If Beauchamp, Pinker and those who agree with them are right, does that mean that the words quoted by MLK, Jr., and President Obama, “The arc of the moral universe is long, but it bends toward justice,” are becoming more evident? Maybe.
Or could it mean that the seeds of the Kingdom of God sown by the followers of Jesus are growing and bearing visible fruit? Perhaps.
If you disagree with the main contention of Beauchamp’s article, let me then ask you this question, If 2013 wasn’t the best year in human history, what year would you suggest as being the best year for the people of the whole world?
Posted by LKSeat at 5:30 AM