On this day before Christmas it is fitting to give some thought to Saint Nicholas, better known now as Santa Claus. “Jolly Old Saint Nicholas” is a traditional American Christmas song, one of many referring to St. Nick. In such songs, of course, that name always refers to Santa.
As most of you know, there really was a historical person who came to be called Saint Nicholas. He was born in 270 and died on December 6, 343. Nicholas, also spelled Nikolaos or Nicolas, became the bishop of Myra, a city in modern-day Turkey on the northeastern coast of the Mediterranean Sea about half-way between Tarsus, the Apostle Paul’s hometown, and Ephesus, the important city on the southwest side of Turkey. Thus, the man behind the Santa Claus legend was often known by the name Nikolaos of Myra.
Much can be learned about the real Saint Nicholas from the wealth of information about him at www.StNicholasCenter.org. And just last year a book by a college professor named Adam C. English was published by Baylor University Press under the title “The Saint Who Would Be Santa Claus: The True Life and Trials of Nicholas of Myra.”
The town that formed where Columbus landed in Haiti on December 6, 1492, came to be known as Saint Nicolas, named for the fourth century saint whose feast day is Dec. 6, and there is a Church of St. Nicolas there to this day. Two Baptist churches in Liberty, where I live, have recently done relief and missionary work in St. Nicolas du Mole, also known as Môle Saint Nicolas, Haiti.
The historical Nikolaos (Nicholas/Nicolas) had a reputation for secret gift-giving, such as putting coins in the shoes of those who left them outside their door—or perhaps in socks hung by the chimney to dry. Centuries later, his kind deeds became the model for Santa in modern times. Saint Nicholas came to be called Sinterklaas in Dutch, and then that name became Santa Claus in English.
Kenneth Woodward, longtime religion editor of Newsweek magazine, has written that a saint is “someone through whom we catch a glimpse of what God is like” (“Making Saints,” 1996). The fourth century bishop of Myra was such a godly man, evidently, that he came to be designated a saint. By observing him, people were able to get a glimpse of what God is like.
So perhaps that is what we can say about Santa Claus. In spite of all the commercialization and clamor that clings to the contemporary conceptions of Saint Nicholas, he is still a type of saint who helps us grasp something of the true meaning of Christmas. Santa can be seen as a symbol of grace, that is, unmerited favor seeking nothing in return. 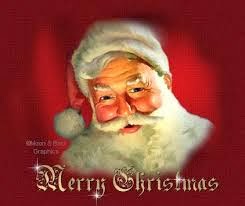 Some children may leave cookies for Santa as a token of their appreciation for the presents they expect him to bring. And some parents use Santa to encourage (manipulate?) their children to be good. (“You’d better behave, or Santa won’t bring you anything.”) And even one of the Christmas songs refers to Santa having a list of who’s “naughty and nice.” But that’s a perversion of the real meaning of the Santa Claus story.
The actual story of Saint Nicholas, and of Santa Claus, is about giving and not asking, or demanding, anything in return. Similarly, God’s Christmas gift, the baby Jesus born to be the Savior of the world, was the epitome of gracious giving. Thus, an adequate understanding of Saint Nicholas can help us get a glimpse of God’s amazing grace.
MERRY CHRISTMAS to you all!
Posted by LKSeat at 5:15 AM