When Will It End?


Tomorrow is September 11, and for twelve years now just hearing “9/11” has evoked horrifying memories of the terrorist attacks on the U.S. Those dastardly attacks triggered the War on Terror by the U.S., a “war” that continues to this day.
President Bush first used the words “war on terror” on Sept. 20, 2001, and that war officially began 17 days later, on Oct. 7, with the invasion of Afghanistan. Now called “Operation Enduring Freedom,” the war in Afghanistan continues and is now the longest war in U.S. history.
In his State of the Union address in February of this year, President Obama declared that “by the end of next year, our war in Afghanistan will be over.” While that plan seems to have strong support in the citizenry and pulling U.S. troops out of Afghanistan will likely take place as scheduled, that won’t mean an end to the War on Terror.
The burning question is: when will it end?
After seeing the movie “Dirty Wars” this summer, I had the sick feeling that there would most likely not be an end to the War on Terror during my lifetime (which I am expecting to be at least another 15 years).
Back in May, the President declared that the War on Terror “must end.” But several Republican Senators, as well as a majority of U.S. citizens, disagreed with him.
Sen. John McCain, for example, blasted the President’s declaration that the war on terror must end as premature and foolhardy, saying that a desire to bring the war “to a compete closure contradicts the reality of the facts on the ground” and declaring that “al Qaeda will be with us for a long time.”
June has often said to me that the military actions of the U.S. in Afghanistan in 2001, in Iraq in 2003, and then in many small-scale actions, such as drone attacks in Pakistan and Yemen, have been like hitting hornets’ nests. Retaliatory strikes have stirred up more and more hatred toward the U.S. (This is depicted well in this recent cartoon in The Economist.) 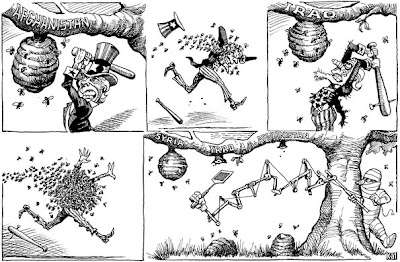 And now there is Syria. Even though point it does not seem to be a part of the war on terror as such, President Obama and Secretary of State Kerry are urging military action against Syria mainly because of its alleged use of chemical weapons.
A recent Pew Research Center poll, though, indicated that only 29% of the American adults surveyed favor a U.S. airstrike on Syria and 48% oppose such a strike. (The others were undecided.)
Nearly three-quarters (74%) of those polled think that U.S. airstrikes would likely create a backlash (stir up more hornets) against the United States and its allies in the region.
Nevertheless, last week the Senate Foreign Relations Committee, by a 10-7 vote, passed a resolution approving a military strike against Syria. It also set a 60-day deadline for the use of force in Syria, with an option for an additional 30 days.
This week the President is making strong appeals to Congress and to the American people, encouraging support for military force against the Assad regime in Syria.
But even if approved by Congress (which may not happen), or even if a strike is launched without congressional approval (which might happen), would such military action end within 90 days? Perhaps, but quite possibly not.
Let us pray that some good alternative to a missile strike, which now seems somewhat possible, will be implemented.
Posted by LKSeat at 6:24 AM