Earlier this month June and I watched “42,” the new movie about Jackie Robinson, who in 1947 became the first African-American to play in major league baseball.
Strangely, I don’t remember much about him specifically. His being a black player seemed to be no big deal four years later when I saw Robinson play. My Aunt Mary took me and a friend to St. Louis in June of 1951, and the first day there we saw the Cardinals play the Brooklyn Dodgers. Robinson (as well as Pee Wee Reese) was in the starting lineup.
The movie “42” also features Branch Rickey, who became general manager of the Brooklyn Dodgers in 1942. He determined in 1945 to bring an outstanding “Negro” player to the major leagues.
In “42” Harrison Ford did a wonderful job portraying Mr. Rickey (1881-1965), as most people called him. Since Rickey’s parents were staunch Methodists, they named him Wesley, but he generally went by Branch, his middle name, taken from John 15:2. 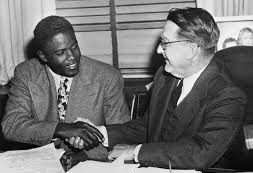 According to the movie, Branch liked Robinson as a strong candidate for the first black major league player (and there were many others) partly because of Jackie’s religion. “He’s a Methodist,” says Rickey. “I’m a Methodist. God’s a Methodist!”
In his first season with the Dodgers, Robinson played first base, and one of his teammates and main supporters was “Pee Wee” Reese, the shortstop and captain of the team. Little did I know when I saw them play in 1951 that eight years later I would become pastor of the Baptist church in Ekron, Kentucky, the town nearest to where Pee Wee was born.
This month I discovered that Pee Wee’s grandmother died in 1924 and was buried in the cemetery right behind the church where I conducted several committal services during my four-plus years as pastor in Ekron.
Pee Wee was born in 1918 and lived near Ekron until he was eight years old when his family moved to Louisville. However, his father Carl Reese died in 1938 and was buried in the Buck Grove Baptist Church Cemetery, about three miles from Ekron.
When we lived in Ekron, I remember hearing some of the old-timers around Buck Grove talk not just about Pee Wee but about his father. Some said Carl was probably a better baseball player than his son but just never had the chance to play professionally.
One of the touching scenes in the movie portrays the real-life incident that occurred when the Dodgers played in Cincinnati for the first time in the fall of 1947. Jackie was the target of considerable hostility, and Kentuckian Pee Wee even received hate mail before that first game with the Reds in Crosley Field.
With the crowd booing as the Dodgers took the field, Pee Wee ran over to first base and put his arm around Jackie in an act of friendship and solidarity. 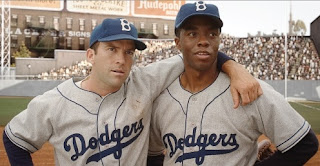 That touching event is depicted in a statue unveiled at MCU Park in Coney Island in 2005. Sadly, that statue was defaced with swastikas and racial epithets earlier this month.
Still, societal conditions are certainly much better now than they were in 1947—or in 1963. But as the President and others reminded us Wednesday at the Lincoln Memorial, there is still much to be done for racial equality and justice in this country.
Posted by LKSeat at 5:55 AM