Tomorrow, August 6, is the 68th anniversary of the atomic bombing of Hiroshima. When the bomb exploded at 8:15 on that hot August morning in 1945, Keiji Nakazawa was on his way to school in Hiroshima.


Even though his father, older sister and younger brother all were killed by the atomic blast, six-year-old Keiji “survived miraculously.”
Although Nakazawa was born in Hiroshima in March 1939, seven months after I was born in Missouri, he died in December of last year.
In 1973 Nakazawa published a serialized manga (comic strip) called “Hadashi no Gen” (Barefoot Gen). It was largely autobiographical: Nagazawa was Gen, the spunky boy in the manga, which was published as a graphic novel in 1975. 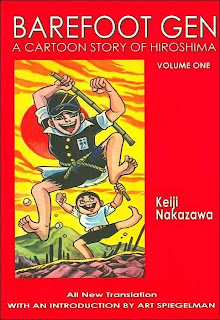 Even though they may be called comic books, there is certainly nothing funny about the story of “Barefoot Gen.”
The pictures are drawn with comic-strip exaggeration, but from beginning to end Nakazawa’s manga depict the great human tragedy of people, mostly non-combatants, who were killed instantly or soon died from injuries received by the atomic bomb dropped on Hiroshima on that fateful August morning.
I read the first volume of “Barefoot Gen” in the 1970s, not long after it first came out in English translation. Last month I read the 1987 English edition of the first volume again and compared it with the new 2004 translation. I also read the second and fifth volumes (published in 2004 and 2007) for the first time.
Even in graphic novel form, it was tough reading because of the horrors depicted.
The first volume mostly tells the story of Gen’s family in the four months before the bombing. Gen’s (Nakazawa’s) father was an outspoken critic of the war frenzy in Japan. Since everyone was expected to be 100% behind the war efforts, he was jailed for a time because of his anti-war talk.
Although it happened earlier in real life, Nakazawa tells about his own father being jailed as a “thought criminal.”
The atomic explosion does not occur until page 250 of the 284-page first volume. So it is the second volume, “The Day After,” which is really hidoi (terrible). But I had known something about that: I had seen “The Hiroshima Panels,” Iri and Toshi Maruki’s large, graphic paintings depicting the horrors of 8/6/45.
However, I hadn’t thought much about the ongoing problem of the war orphans and all the destitute survivors in Hiroshima not only in the months but also in the years following the bombing. That sad story is told in the fifth volume, “The Never-Ending War,” which begins in December 1947.
Toward the middle of that book Nakazawa writes,

The Pacific War ended with the dropping of the atomic bomb. But for people exposed to the bomb’s radiation, the postwar era was just the beginning of a new war with the bomb’s terrifying after effects. In U.S.-occupied Japan, the news media were strictly forbidden from reporting about the effects of the A-bomb. The voices of the suffering – 300,000 atomic bomb survivors – floated into space unheard (p. 156).

How different was Gen’s (Nakazawa’s) life in 1947-48 than mine as a fifth grader in rural northwest Missouri! How little I knew about boys like Gen who were suffering in Japan at that time!
“Barefoot Gen” is well worth reading. I recommend it as a way to grasp something of the unspeakable horror of nuclear bombs and to be impressed with the ongoing need to work for peace and justice in this world of ours. 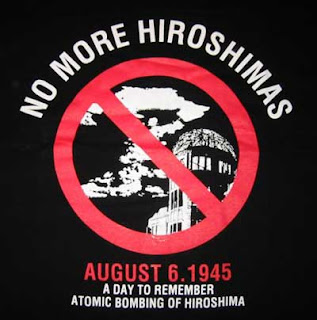 Note: The quoted words in the second paragraph come from Nakazawa’s book, “Hiroshima: The Autobiography of Barefoot Gen” (2010), p. xxiii.
Posted by LKSeat at 5:21 AM