“On the Fifteenth of May, in the Jungle of Nool”

On the fifteenth of May, in the jungle of Nool,
In the heat of the day, in the cool of the pool,
He was splashing…enjoying the jungle’s great joys…
When Horton the elephant heard a small noise.

Many of you have read this book to your children or grandchildren, and perhaps some of you have watched the delightful 2008 movie version with them. But do you know that this and other Dr. Seuss books are the subject of theological and philosophical considerations?
In 2004, James W. Kemp, a retired Methodist pastor, published a book titled “The Gospel According to Dr. Seuss.” And Jacob M. Held, a philosophy professor at the University of Central Arkansas, is the editor of “Dr. Seuss and Philosophy,” a 260-page book published in 2011.
Dr. Seuss (Theodor Seuss Geisel, 1904-91) published 46 children’s books, and children across the country, as well as their parents and grandparents, have very much enjoyed the rhyming, rhythm, and rhetoric of those books as well as the illustrations, drawn by the author. And even though subtle, there is an important moral teaching in most of his books.
Sometimes the moral is misunderstood. The line "A person’s a person, no matter how small!!" from “Horton Hears a Who!” has been used as a slogan by the anti-abortion movement in the U.S.
While Geisel preferred to let his work speak for itself, he did occasionally speak out to protect his characters from exploitation. In 1986 when that line from “Horton” was first used by the pro-life movement, he demanded a retraction and received one.
Actually, “Horton Hears a Who!” is said to be an allegory for the Hiroshima bombing and the American post-war occupation of Japan, and it was dedicated to a Japanese friend. 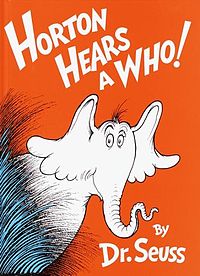 Seuss wrote “Horton” after visiting Japan in 1953 and admitted that Who-ville was partially modeled on the country, which had just emerged from U.S. occupation at the time. The book’s dedication, “For My Great Friend, Mitsugi Nakamura,” refers to a professor he met on that trip.
One of the philosophy professors, though, suggests a different underlying message in “Horton.” He says that “we must remember that Dr. Seuss published this story in 1954, in the midst of the civil rights movement.” That was when many Americans “remained ‘blind’ to the plight of African Americans” (“Dr. Seuss and Philosophy,” p. 130).
And some of the authors of the same book use “Horton” to explain the moral ideas of Immanuel Kant, one of the most difficult-to-understand German philosophers.
For example, the co-authors of the ninth chapter write, “Horton is promoting the view that all people matter. All people possess an inherent, inviolable value beyond any price or measure; all people possess dignity. Kant couldn’t have said it better” (p. 107).
“Horton Hears a Who!” is the seventh chapter in Kemp’s delightful book. He relates the theme of that Seuss story, “a person is a person, no matter how small,” to Psalm 24:1-2. Kemp contends that

we must, like Horton, hear the cries of other people, no matter how small or insignificant they may be in the world’s eyes. If anything, Scripture instructs us to take special care of those people—especially widows, orphans, and prisoners—who are downtrodden and have been marginalized from the spheres of influence in our society (p. 49).

And that is something worth considering on this fifteenth of May, even if you are not in the Jungle of Nool!
Posted by LKSeat at 4:08 AM