Islamophobia is defined as “prejudice against, hatred towards, or irrational fear of Muslims.” Especially since 9/11/01 there has been a sizeable percentage of U.S. citizens who have displayed varying levels of such fear. And the tragic bombings in Boston last month intensified Islamophobia in some people and perhaps provoked it in others.
Just three days after the Boston bombings, I heard a discussion between Michael Savage and his guest Walid Shoebat. Savage (b. 1942) has been the conservative talk radio host for “The Savage Nation” since 1999. He has also authored a number of books, including “Liberalism Is a Mental Disorder” (2005).
Savage has been charged with being an Islamophobe for years, and since 2009 he has been barred from entering the United Kingdom for allegedly “seeking to provoke others to serious criminal acts and fostering hatred.” So it was not surprising he would have such a cordial interview with Shoebat.
Walid Shoebat (b. 1960) is a Palestinian American Christian who converted from Islam. He lectures on the dangers of Islamic radicalism and strongly supports the state of Israel. His new book is titled “The Case FOR Islamophobia: Jihad by the Word; America’s Final Warning” (2013). But he is just one of many vocal Islamophobes widely heard on the public media.
Fairness & Accuracy In Reporting (FAIR) is a progressive media criticism organization founded in 1986 and based in New York City. Back in 2008 they published "Smearcasting: How Islamophobes Spread Bigotry, Fear and Misinformation." Part of that paper included a listing of “the dirty dozen,” America’s leading Islamophobes. Savage is on that list, of course, as are fellow talk radio hosts Glenn Beck, Sean Hannity and Bill O’Reilly, as well as Pat Robertson.
And then there is Brigitte Gabriel. I mention her because of recently receiving a YouTube video of her lecturing, sent to me by a boyhood friend (not that he particularly agreed with the video). Gabriel (b. 1964) is a Lebanese-American journalist, author, and activist who founded the American Congress For Truth—and a very persuasive speaker.
Back in 1997 the Runnymede Commission in Great Britain produced a consultation paper entitled “Islamophobia: Its Features and Dangers.” One main purpose of the publication of that report was to counter Islamophobic assumptions that Islam is a single monolithic system. That is the main problem with Islamophobia: it sees all Muslims as being the same, mainly as terrorists bent upon destroying the U.S.
We who know well the great diversity within Christianity should be able to understand there is the same sort of diversity among people who are Muslims or who have a Muslim background. Would all of us Christians want to be judged by the likes of Timothy McViegh, the Oklahoma bomber who was a confirmed Catholic Christian and who was deeply influenced by the Christian Identity movement? Or would we want to be identified with Rev. Fred Phelps and his hateful activities done as a “Christian” (Baptist) pastor? 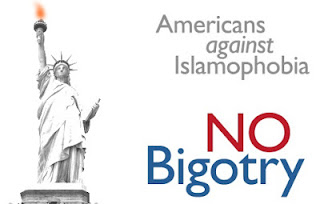 Terrorism and hatred must be strongly opposed and denounced regardless of the religion or the ideology of those who perpetrate them. So groups of people, made up mostly of peaceful, law-abiding citizens should not be condemned because of the evil acts and attitudes of some within those larger groups.
Islamophobia should be opposed by all people of good will, for it fosters discrimination, exclusion, prejudice and violence toward many decent people. Rather than harboring fear and hatred toward a group of people, let’s embrace a worldview based on love, one that fosters understanding and acceptance of people with different religious and/or cultural viewpoints and one that engenders acts of kindness.
Posted by LKSeat at 6:49 AM