Is Today the Day War Begins in East Asia?

Today might be the day war breaks out in East Asia, for this is the “Day of the Sun,” the most celebrated holiday of the year in the Democratic People’s Republic of Korea (North Korea). Day of the Sun commemorates the birth of “Eternal President” Kim Il-sung on April 15, 1912.
Some have speculated that on this auspicious day Kim Jong-un, the young dictator of North Korea and grandson of Kim Il-sung, will make a daring show of power, following up on recent threats hurled at South Korea, Japan and the United States.
But as it is already evening in Pyongyang, which is 14 hours ahead of where I am posting this (in CDT), perhaps Supreme Leader Kim (b. 1983/4) has decided not to carry out his threats, at least not today. And if not today, maybe not at all. Maybe it has all been bluff and bluster after all. Let’s hope so.
Kim Il-sung’s birthday marks the beginning of the first year in the current North Korean calendar, so today is New Year’s Day, Juche 102. Actually, the beginning of Juche 102 was also celebrated on January 1, as the country uses both the Gregorian and their own unique calendar. But April 15 is celebrated more elaborately.
“Juche” is the Korean name for Kim Il-sung’s political thesis, which declares that the Korean masses are the masters of the country’s development. According to Kim, the Juche idea is based on the belief that “man is the master of everything and decides everything.” That doesn’t sound very religious, at least in the usual (Western) sense of the word.
Yet, “Just one more religion?” is the title of an April 7 online posting of The Economist. That article points out that according to www.adherents.com, Juche is the 10th most widely followed religion in the world, with 19 million adherents. (By comparison, Judaism is 12th with 14 million adherents worldwide.) But Juche is likely the largest religion most people have never heard of.
Those who follow The Economist closely may know a little about Juche. And some few may have heard of the book “Juche: A Christian Study of North Korea’s State Religion” (1999) by Thomas J. Belke. As quoted in The Economist, Belke states that Juche is a religion because it “has a comprehensive belief system, holy places, distinctive customs” and also because “it displaces other religions.”
Juche is certainly not a religion in the same sense that the so-called “world religions” (Christianity, Islam, Buddhism, etc.) are. But it can be argued that it is a religion in the same way that Marxism, Stalinism, Maoism are, or have been, religions.
As the picture shows, Kim Il-sung and his family are highly venerated in North Korea. But ancestors are widely venerated in East Asia, and deep bowing is common even before living people, especially those of high rank. But does veneration and bowing indicate the existence of a religion, or religious worship? 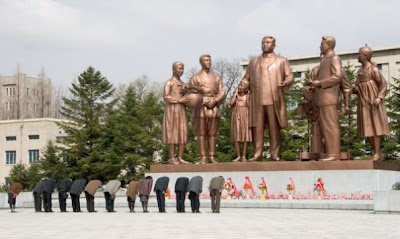 If Juche is a religion at all, it is what might be called a secular religion, for it seems to lack any sense of the transcendent. It is much more like an ongoing personality cult, one that demands loyalty and subservience to Kim Il-sung and his descendants by the North Korean people. As such, it is a powerful ideology that elicits legitimate concern by the nations of the world—for it might not be all bluff and bluster.
Let’s pray that today’s Day of the Sun celebration does not include the launching of missiles aimed at South Korea, Japan or U.S. territories, which would likely start a war in East Asia.
Posted by LKSeat at 5:48 AM