“The earth is the LORD's, and the fulness thereof; the world, and they that dwell therein.” Many of us grew up hearing these words from Psalm 24:1 (KJV) from time to time. That being the case, it would seem that churches would be eager to celebrate Earth Day, using the Sunday closest to that day as a special time to emphasize the proper use of and care for the earth.
However, and it may just be my misperception, it seems that churches now are less likely to celebrate Earth Day than most other segments of society.
Monday, April 22, will be Earth Day 2013, and this year’s global Earth Day theme is “The Face of Climate Change.” Maybe even more than in the past, churches may not say much about Earth Day this year, for there are Christians (and a growing number of pastors) who reject the idea of climate change, at least as something that is being caused by or made worse by us humans. 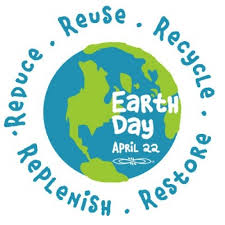 The genesis of Earth Day is credited to Gaylord Nelson (1916-2005), a U.S. Senator (D-Wis.), who called for an environmental teach-in to be held on April 22, 1970. Over 20 million people participated that year. It has been an annual observance ever since. But not everyone thinks that Earth Day is a good or necessary celebration—especially if it talks about such things as global warming.
Chris Mooney is a young (b. 1977) U.S. journalist and academic, a Yale University graduate who now focuses on writing about science and politics. His most recent book is “The Republican Brain: The Science of Why They Deny Science—and Reality” (2012).
In the Introduction of his new book, Mooney makes reference to a recent survey which indicated that “only 18 percent of Republicans and Tea Party members accepted the scientific consensus that global warming is caused by humans” (pp. 6-7). “In other words,” Mooney goes ahead to say, “political conservatives have placed themselves in direct conflict with modern scientific knowledge, which shows beyond serious question that global warming is real and caused by humans” (p. 7, emphasis in original).
This issue of climate change continues to be a divisive issue among U.S. citizens in general and among Christians in particular. According to Conservapedia.com, global warming is a “liberal hoax.” (In case you don’t know, Conservapedia is written from a self-described American conservative and Christian point of view. The website was started in 2006 by Andrew Schlafly, son of the anti-feminist activist Phyllis Schlafly, to counter what he called the liberal bias of Wikipedia.)
But can or should the problem of global warming be so easily brushed aside? Earlier this month the name of James Hansen was in the news. On April 2 a CBS headline said, “NASA climate scientist James Hansen quits to fight climate change.” Hansen (b. 1941) had been the head of the NASA Goddard Institute for Space Studies since 1981. Upon leaving NASA he said he planned to take a more active role in the political and legal efforts to limit greenhouse gases.
This is just one example of a multitude of top-notch scientists who have no doubt that global warming is real and caused by humans as Mooney declared. That is why I happy that Earth Day will widely observed on April 22, in spite of conservative Christians, and why I hope it will help more people face up to the fact of climate change and the necessity of us humans doing more to combat the dire consequences of that change.
Posted by LKSeat at 6:05 AM