The Martyrdom of Felix Manz

Felix Manz is not exactly a household name for most people, although he is widely known in Anabaptist circles. (The family name is sometimes spelled Mantz, as in the name of the library named in his honor at Bethel College in Newton, Kansas).
A man of strong faith and conviction, Manz was martyred 486 years ago today, on January 5, 1527. On that fateful day, Felix was bound, taken to the middle of the Limmat River in the heart of Zurich (Switzerland), and executed by drowning.
Felix Manz was born around the year 1498, the son of one of the priests at the magnificent Grossmünster Church in Zurich and the priest’s concubine, who lived (at least later) in her own house on Neustadt Lane very near the church.
Ulrich (Huldrych) Zwingli became the head priest at Grossmünster at the end of 1518 and soon began to preach about reforming the Catholic Church. The young man Felix Manx became one of Zwingli’s ardent students. But by 1524 Felix, and a few others such as his good friend Conrad Grebel, became increasingly dissatisfied with Zwingli, whose reforms did not go far enough, they thought.
Finally, a group of people met in the house where Felix lived with his mother, and they formed a new faith fellowship on the basis of baptism following an open confession of faith in Jesus Christ. Grebel baptized an older man, George Blaurock (c. 1491-1529) and then he baptized Grebel and the others gathered there that day, January 21, 1525.
The group called themselves the Swiss Brethren—but their opponents, mainly Zwingli and the leaders of the Grossmünster Church as well as the Zurich city council, derisively called then Anabaptists (re-baptizers). In March 1526 the city council passed an edict making re-baptism punishable by drowning.
On January 5, 1527, Manz was sentenced to death, “because contrary to Christian order and custom he had become involved in Anabaptism.” About 3 p.m. that afternoon he was taken by boat onto the Limmat River, which runs not far from the front of Grossmünster Church. His hands were bound and pulled below his knees and a pole was placed between them—and then he was shoved into the river to die by drowning.
Manz was the first person to be martyred by Protestants. Some referred to his watery death as his “third baptism.”
In 2004 the Evangelical-Reformed Church of Zurich had a six-month commemoration of the 500th anniversary of the birth of Heinrich Bullinger (1504-75), Zwingli’s successor as the head priest of Grossmünster. On June 26, that Church confessed their sins of the sixteenth century and asked for forgiveness by the descendants of those first Anabaptists.
That evening, a historical marker was unveiled on the bank of the river when Manz was matryred 477½ years earlier. June and I were quite moved when we visited that spot and saw the marker in May 2005. (In the picture, the marker is on the lower left, and the “twin towers” of Grossmünster Church can be seen in the background.) 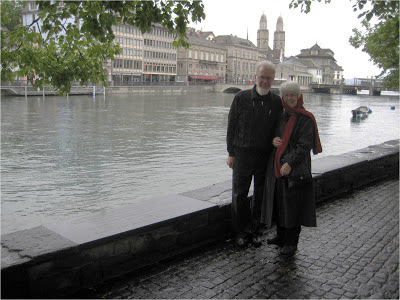 The issue for Manz the other early Anabaptists was not just the rejection of infant baptism. The larger issue was the question about the nature of the church and the meaning of Christian discipleship. Those are topics that still merit serious consideration today.
_____
1/8 -- Bob Carlson, a fellow member of Rainbow Mennonite Church and good friend, shared the following picture of the historical marker pictured, but unreadable, above: 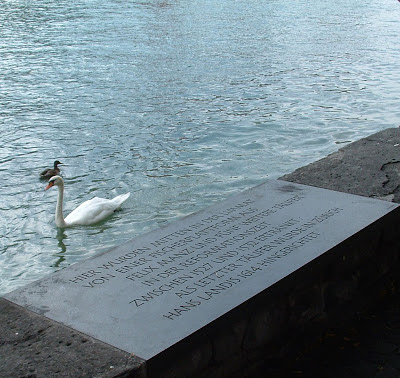