Happy New Year of the Snake

On this last day of 2012, which is already the first day of 2013 for some of my readers, I take this means to wish you all a very happy and healthy new year. 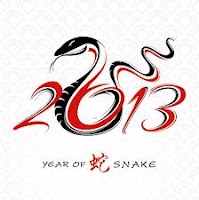 In East Asia, 2013 is the Year of the Snake, although in China and those countries that still follow Chinese customs the new year doesn’t begin until February 10. While in the West a snake usually conjures up bad images and is sometimes a symbol of evil, that is not the case in East Asia.
In several ancient cultures, snake worship was a common practice, and the ancient Egyptians saw the snake as a symbol of wisdom. Similarly, to the Chinese of the past and many of the present the snake is a symbol of good fortune.
Still, the snake is my least-liked of the twelve Asian zodiac symbols. I have never liked snakes of any kind anywhere.
In the English-speaking world, “a snake in the grass” is an idiom used for “a sneaky and despised person.” And “killing snakes” is a metaphor sometimes used to describe energetic effort in getting something done; usually it means going overboard, being a bit overzealous. In these and other western expressions, snakes are seen negatively.
In its first edition of the year, The Economist magazine wrote, “So in Tokyo it is already the year of the snake. In the East these animals are associated with good fortune. Japan’s politics being what it is these days, the western meaning may be more suitable.”
That was in written in 1989, two cycles ago; some things don’t change much! (I don’t have many positive feelings toward the new Prime Minister of Japan who was elected earlier this month.)
But it is true, in East Asia the snake is a symbol of good fortune, and those born in the Year of the Snake (for example, those born in 1941, 1953, 1965) are usually kind, vibrant, introspective, and refined—or so it is said.
So this is a special year for people born in those years (and there may even be some readers who were born in 1929). I hope it will be an extraordinary year for all of you born in the Year of the Snake, even if you don’t live in Japan or China.
Who knows, though, what will happen in our world, on in our personal lives, between now and the beginning of next year, the Year of the Horse. Some of you reading this may no longer be here next year—and neither may the one writing this. (My daughter Kathy’s father-in-law suddenly passed away last week—just three days after they saw him “hale and hearty” in Louisville; he was several years older than I, but still . . .)
So perhaps the beginning of the new year is a good time to recall, and to pray, the words of the 1974 hit song that contains these important words,

Yesterday’s gone, Sweet Jesus,
And tomorrow may never be mine.
Lord, help me today,
Show me the way,
One day at a time.

I pray that you will, indeed, have a happy new year, one day at a time.
Posted by LKSeat at 9:00 AM