It was 50 years ago this month, on October 11, 1962, that the Second Vatican Council (Vatican II) opened in St. Peter’s Basilica. Convoked by Pope John XXIII, it closed in December 1965 under Pope Paul VI. 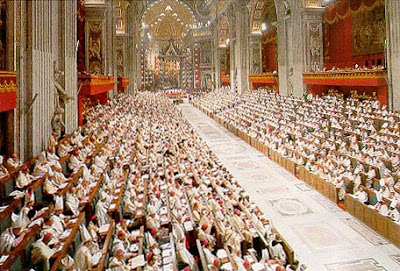 Vatican II was the 21st Ecumenical Council of the Roman Catholic Church, and only the second to be held since the highly significant Council of Trent in the 16th century. Vatican I, the 20th Council, was convened in 1869-70 at a time of great turmoil. The primary result, however, was the (questionable) defining of papal infallibility as a dogma of the Church.

By contrast to Vatican I, which failed to deal substantively with the contemporary problems of the rising influence of rationalism, liberalism, and materialism, Vatican II made many momentous decisions and greatly changed the Roman Catholic Church.

The second volume of Reclaiming Our Roots: An Inclusive Introduction to Church History (1999) by Mark Ellingsen is the textbook I am currently using in the course I teach at Rockhurst University. Here are three of Vatican II’s “progressive decisions” according to Dr. Ellingsen:

** Recognizing members of Protestant churches as “separated brethren.” Thus, it was “no longer official Catholic teaching that all Protestants are damned as heretics.”

** A countenancing of the use of the vernacular, instead of Latin, in worship.

** A recognition of non-Christians sincerely seeking to do God’s Will with their actions . . . as numbered among the people of God (pp. 336).

As a Protestant, it seems to me that the above changes, and the several others that Ellingsen lists, are good and important, beneficial for the Catholic Church and for Christianity as a whole. But not all agree.

I have not yet finished reading Ross Douthat’s book Bad Religion (2012), but I am finding it quite interesting—and problematic in places. Douthat (b. 1979), a New York Times columnist (and the youngest regular op-ed writer in the paper's history), is a Catholic who is quite conservative both religiously and politically.

Douthat sees Vatican II as “the marriage of orthodoxy and American liberalism” that eased the Church “toward ever greater accommodation with the modern world” (pp. 94, 95). And he sees the decline in Catholicism since the mid-1960s at least partly due to the negative influence of Vatican II.

Conservatives can always find ways to link present problems to liberal ideas. (Of course, the same may be true for liberals, who tend to see contemporary problems being due to the conservatism of the past.) But it is hard for me to think that Vatican II was anything but a positive course-correction for the Roman Catholic Church.

There are some (many?) who now think the time has come for “Vatican III” to be convoked. Quite certainly that will not happen under the present Pope, but who can tell who Benedict XVI’s successor will be or what will happen then.

Many of my Catholic students, among many other young American Catholics, strongly think the Church ought to make at least these three important changes: (1) approve the use of contraceptives, (2) allow priests to marry, and (3) allow women to become priests.

If, or when, “Vatican III” is convened those will likely be key issues discussed. Some Catholic theologians, such as Hans Küng, thought that such changes should have been made at Vatican II.

Still, the changes that were made at Vatican II were many and important, so I am happy to use this posting to commemorate its golden anniversary.
Posted by LKSeat at 5:42 AM