Billy Graham, who according to the Gallup Organization was the seventh most admired person in twentieth century (by Americans), suddenly has become quite political. Earlier this month, Mitt Romney went to visit him and they prayed together—which certainly was not something unusual: Graham has known and prayed with every President from Harry Truman to Barack Obama.
After his prayer with Romney, though, Billy is quoted as saying to Mitt, “I will do anything I can to help you.”
A few days later, the Billy Graham Evangelistic Association (BGEA) changed a website article, removing the reference to Mormonism as a cult. The website previously read, “A cult is any group which teaches doctrines or beliefs that deviate from the biblical message of the Christian faith.” It went on to state, “Some of these groups are Jehovah’s Witnesess, Mormons, the Unification Church, Unitarians, Spritualists, Scientologists, and others.”
It may well be a good thing that the BGEA no longer considers Mormonism a cult. But the timing is certainly interesting: they made that change just a very few weeks before the election in which one of the candidates is a Mormon.

Then last week in the Wall Street Journal and other newspapers, the BGEA placed a full-page ad that was an implicit endorsement of the Romney-Ryan ticket. The ad states:

The legacy we leave behind for our children, grandchildren and this great nation is crucial. As I approach my 94th birthday, I realize this election could be my last. I believe it is vitally important that we cast our ballots for candidates who base their decisions on biblical principles and support the nation of Israel. I urge you to vote for those who protect the sanctity of life and support the biblical definition of marriage between a man and a woman. Vote for biblical values this November 6, and pray with me that America will remain one nation under God. 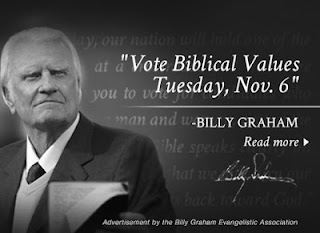 But what are biblical values? The same Bible (Old Testament) that is used (by some) to condemn gays (Leviticus 18:22, 20:13) also seems to accept or even to approve of polygamy (such as in the case of Jacob, for example). It is questionable to use the first to tout “biblical values” but disregard the many examples of the latter.
Or why are the two cited verses from Leviticus used to support a biblical value but the following verses are not? “Do not take interest or any profit from them, but fear your God, so that your poor neighbors may continue to live among you. You must not lend them money at interest or sell them food at a profit” (Leviticus 25:36-37).
Sanctity of life, I would agree, is certainly a biblical value. But as I explained in my October 15 posting, abortion done under the right conditions in the first trimester is not the “taking of life.”
Loving one’s neighbor as oneself, however, is unquestionably a biblical value if we take the teaching of Jesus seriously at all. Thus, by implication, such love would surely include such things as providing universal health care coverage and helping to provide for the needs of the poor as well as opposing the exploitation of the poor by the rich.
Sojourners has produced a very good voters’ guide (available at this link), one that includes many more vital biblical values than the narrow, and questionable, version offered by Billy Graham.
Posted by LKSeat at 5:36 AM