The Sunday School class I attend each week has spent the last six weeks discussing Jesus for President: Politics for Ordinary Radicals (2008) by Shane Claiborne and Chris Haw. Claiborne (b. 1975) is also the author of the fairly widely read The Irresistible Revolution: Living as an Ordinary Radical (2006).

During the previous quarter we studied John Howard Yoder’s classic work, The Politics of Jesus (1972, 1994). The content of the two books is quite similar in many ways, and the authors of Jesus quote Yoder repeatedly. But the style of the two books couldn’t be more different. While Yoder’s book is presented in a very scholarly, and somewhat pedantic, manner, Jesus is written in a very jazzy, and somewhat gaudy, style.
As one reviewer has remarked, the design of Jesus for President is “a wonder to behold.” Quite so. I have never seen a book as elaborate (or outlandish?) in its visual presentation. The design is so extreme it is off-putting to some people. But no doubt it is quite appealing to others. (It was most probably designed to appeal to people the age of my older grandchildren much more than to people my age.)
But the content of Jesus for President needs to be taken seriously by Christians of any age. One main point seems to be that the followers of Jesus are not primarily seeking to gain and wield political power in the secular world. Rather, they are seeking to embody a political and social alternative to the dominant society (see p. 228). 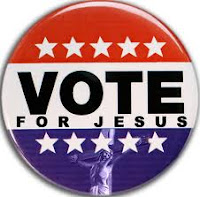 The authors conclude that “rocking the vote” may mean “going to the booths and writing in our Candidate, because he doesn’t seem to be on the ballot” (p. 335). But I am not quite sure what the authors are suggesting here. Surely they are not seriously suggesting that that be done literally. But others are.
Bill Keller, an American television evangelist and the host of “Live Prayer,” recommends voting for Jesus literally. On VotingForJesus.com he exclaims, “It is time for Christians, true followers of Jesus Christ, to rise up and say NO to satan [sic] this November!” He goes on to say that if God allows the upcoming election for President to be between Obama and Romney, “it would truly be satan flipping a two-headed coin with his head on both sides!”
This morning Keller’s website indicates that more than 225,723 people have “committed” to vote for Jesus in November. But what good is that going to do?
True, we need to beware of thinking that any politician is going to be a “messiah.” That is perhaps one of the mistakes the some Left supporters of Obama made in 2008—and that may be a central point Claiborne and Haw are trying to make in their book published that year.
In October 2008 I said more than once that I thought Obama was promising too much (as perhaps most politicians do). And some of his supporters expected much too much. Some seem to have seen Obama as a type of messiah—and his opponents have charged that he had (or has) a messiah complex. Certainly the President has not lived up to the expectations of those who thought he was an American savior.
Our true hope for the kind of change most needed in this country, and in the world, will not come from any politician. That is a major point well made in Jesus for President.
Posted by LKSeat at 5:46 AM