In “Jesus for President,” the previous posting on this blog, I mentioned that in 2008 some people saw Barack Obama as a type of messiah. However, there now seems to be far more on the Internet, and in the mass media, that demonizes the President. 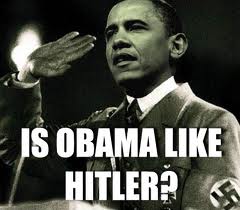 Recently, I have seen numerous comparisons of the President to Hitler, and there are websites, and bumper stickers, that say Heil Obama! (Just Google “Heil Obama” and see all the websites that come up, or search for images with the same name and see the great variety that appear.)


In July 2010 the North Iowa branch of the Tea Party erected a billboard comparing Obama to Adolf Hitler and Vladimir Lenin. (That billboard was shown on one of the objectionable e-mails I wrote about on my blog posting for July 15.) The billboard in question was removed in a week because of the strong protests it, deservedly, elicited.
Now the End Begins is the name of a website, created in 2010, and of a Facebook account, which has nearly 31,000 “likes.” (I referred to that apocalyptic website on June 25; the collage picture on their homepage refers to the upcoming election as one with “the Muslim vs. the Mormon.”) A fairly recent posting on that website is titled “Similarities Between Obama And Hitler: A Factual Comparison.” (That webpage claims that it has been shared over 5,000 times.)
In April of this year Roman Catholic Bishop Daniel Jenky (b. 1947) of Peoria, IL, compared the President’s policies to those of Hitler and Stalin. In spite of a petition signed by more than 23,000 people calling for an apology, none seems to have been made to this point.
Earlier this month, Maine Gov. Paul LePage (b. 1948), in criticizing President Obama’s health care overhaul, described the Internal Revenue Service as the “new Gestapo”. He later issued a formal apology.
Much of the President’s most criticized activity, however, is quite the opposite of Hitler’s policies. Hitler, as is widely known, sought to purify Germany by getting rid of non-Aryans. President Obama has forwarded an inclusivist position, reaching out to embrace people not a part of the “mainstream.”
Last month the President eased enforcement of US immigration laws so young illegal immigrants can remain in the country to work and study without fear of deportation. That directive by the President was vociferously criticized by the political Right. Glenn Beck, for example, said Obama’s decision simply shows that the President is in true violation of the constitution. But be that as it may, it was certainly not an act seeking to keep the dominant ethnic group pure.
Hitler sought to keep the Aryan race pure by means of euthanasia. He issued such an order (T4) in 1939, and around 200,000 people who were mentally defective, severely handicapped, and incurably insane or sick were subsequently put to death. By contrast, “Obamacare,” so much maligned by the Right, seeks to provide insurance coverage to the tens of millions with no insurance coverage and to keep insurance companies for exempting people with pre-existing conditions.
Moreover, while there was persecution of homosexuals in Nazi Germany under Hitler, Obama is strongly criticized by some of the same people who compare him to Hitler for advocating repeal of “Don’t Ask Don’t Tell,” his lack of enforcement of the Defense of Marriage Act, and his support of same-sex marriage.
It is legitimate for people to disagree with and oppose the President, if they are so inclined. It is not at all legitimate to compare him with Hitler in doing so.
Posted by LKSeat at 5:53 AM