In Memory of the 26 Martyrs

It was 415 years ago today, on February 5, 1597, that 26 Christians in Japan were crucified on Nishizaki Hill in Nagasaki. This column is written in memory of those men (and boys) who suffered such cruel deaths.
Christianity was first introduced in Japan by Francis Xavier and two fellow Jesuits, who landed on the southernmost island of Kyushu in 1549. Over the next few decades Christianity spread rapidly in southwestern Japan—so much so that it came to be considered a threat by Toyotomi Hideyoshi, better known as Taikosama, the absolute ruler of Japan from 1585 until his death in 1598.
By the 1580s there were some 250,000 Christians in Japan. That was still fewer than 2% of the population, but perhaps a fear of the “foreign” nature of Christianity and its possible link to Western imperialism motivated Hideyoshi to issue a decree that banned Christianity and expelled all missionaries in 1587. Because that decree proved to be ineffective, the crucifixions of 1597 were a sign that government opposition to Christianity was going to become more severe, which it did.
The 26 martyrs included six Franciscan missionaries, three Japanese Jesuits, and seventeen Japanese laymen including three boys (ages 12, 13, and 14). Twenty-four of them were arrested in Kyoto. Beginning on January 9 they were forced to walk, sometimes barefoot through the snow, to Nagasaki, arriving there on the day they were crucified.

The 26 martyrs were canonized (made saints of the Roman Catholic Church) in 1862, and on the 100th anniversary of that occasion the Twenty-Six Martyrs Monument was constructed in 1962 on Nishizaki Hill. (The picture below shows that monument, which I have visited several times.) Shortly thereafter, a museum was built adjacent to the monument and both remain popular tourist attractions in Nagasaki City. 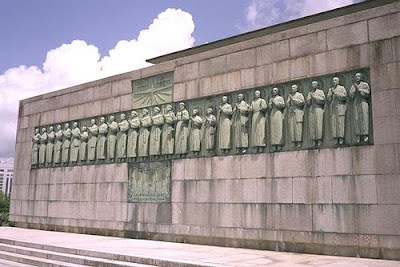 There is little indication that Hideyoshi acted as he did for religious reasons. It was almost completely for political reasons and out of the fear that his rule might be threatened.
Religious persecution is carried out far more often for political purposes than because of religious belief. And the same is true for violence done in the name of religion.
Religion is often denounced because of its link to violence—the Crusades are a perennial example. But violence done primarily because of religious belief is small, indeed, compared to that done because of political power and the desire to maintain or extend that power.
In the 1930s the militarists in Japan increasingly used Shinto, the traditional religion in Japan, in order to stir up feelings of Japanese exceptionalism. Greater emphasis was placed on February 11 as the anniversary of the “founding” of Japan in 660 B.C. by the first Emperor, a direct descendant of the sun goddess. On February 11, 1940, showy ceremonies throughout Japan celebrated the 2600th anniversary of the nation’s mythical beginning.
Soon after the end of WWII, the 2/11 holiday was abolished. But then in 1966 it was re-established as National Foundation Day, in spite of considerable opposition that has continued until the present. Many Christians throughout Japan protest that holiday and in its place celebrate February 11 as “Protecting Religious Freedom Day.” So on this coming Saturday, gatherings emphasizing that theme will be held in many cities across Japan.
Protecting religious freedom continues to be important in this country, too. And, like in Japan, it is primarily the freedom of the minority religions (or the minority who do not embrace a religion) that needs to be protected most actively.
Posted by LKSeat at 6:01 AM