Baptist with a Small ”b”

For nearly 65 years now I have been a member of a Baptist church. When I was baptized in April 1947 at the age of eight, on the basis of a profession of faith that remains foundational for my life, I became a Baptist church member and have been a member of a local Baptist church from that day to the present.
My Baptist roots run deep: my parents and grandparents were all Baptists. In addition, I have four academic degrees for three Baptist schools and was supported financially by Southern Baptists for 38 years.
Nevertheless, since last fall June and I have been attending a Mennonite church, and although we have not yet formally become members there we are moving in that direction. There are several facets to this change of denominational affiliation that I won’t try to explain here.
In another sense, though, becoming a Mennonite does not mean completely separating from our roots, for as theologian James McClendon has emphasized, there is a strong tradition that can be labeled baptist (with a lower case “b”).
James William McClendon Jr. (1924–2000) was an ordained Southern Baptist minister who taught in a number of schools, the last being Fuller Theological Seminary. His magnum opus was the three-part Systematic Theology: Ethics (1986), Doctrine (1994), and Witness (2000). It is in the first chapter of the former that McClendon writes about the meaning of baptist with a small b.
When in the preface of my book Fed Up with Fundamentalism (2007) I criticized the Southern Baptist Convention from which I felt estranged, I stated that “I certainly have no intention of jettisoning my identity as a baptist, with a small b” (p. v; McClendon is cited in a footnote at that point.) And that is still true. 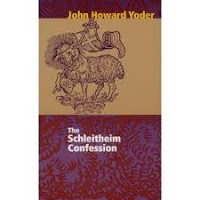 The baptist tradition is traced back, specifically, to January 1525, more than 80 years before the formation of the first Baptist church in 1609. Its fundamental (and distinctive) beliefs were expressed in the Schleitheim Confession adopted 485 years ago yesterday, on February 24, 1527.*
The first article of that 1527 Confession is common to Baptists and baptists; it is about believers’ baptism and the rejection of infant baptism. My impression is that for most churches in the Anabaptist (baptist) tradition, except for the very strict groups such as the Amish, there is little emphasis now on the second article, which is about the ban (shunning deviant members).

It is the sixth article, though, that has been a major impetus in moving me from a Baptist church to a baptist church. That article is about rejection of the sword, which through the years has meant commitment to pacifism and rejection of violence. The latter includes, among other things, renouncing capital punishment as well as war.

In spite of there being a North America Baptist Peace Fellowship, which in many ways is more baptist than Baptist, through the years pacifism has not been the position of most Baptists. But I decided while still in high school that pacifism is the position I should espouse because of being a follower of Christ.

It is a good feeling now, after all these years, to be going to a church where pacifism is the norm instead of something considered suspect, if not outright wrongheaded.
*The main author of the Schleitheim Confession was Michael Sattler, whom I mention in my 3/20/11 blog posting.
Posted by LKSeat at 5:46 AM