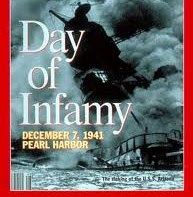 President Roosevelt called December 7, 1941, “a date which will live in infamy.” He was referring, of course, to how Pearl Harbor “was suddenly and deliberately attacked by naval and air forces of the Empire of Japan.”
And he was right. Now, seventy years later, Americans remember that date well and December 7 does live in infamy.
As it turned out, though, the war with the U.S. initiated on 12/7/41 was a day of infamy for Japan also. In my thirty-eight years in Japan, I never heard Japanese people speak of the attack on Pearl Harbor except in embarrassment, with shame, and, often, with resentment toward the Japanese militarists who (mis)led their nation into war.
The loss of around 3,000 American lives at Pearl Harbor on that fateful Sunday morning was tragic, indeed. And, of course, a vastly greater number of U.S. servicemen (and perhaps some servicewomen) were killed in the ensuing war. The number of Japanese, though, who died as the result of the war begun on that day of infamy was considerably larger.
In one of the biggest understatements in history, the Japanese Emperor said in his surrender speech on August 15, 1945, “the war situation has developed not necessarily to Japan's advantage.” That surrender came after what can legitimately be called other days of infamy earlier that year.
“All’s fair in love and war” is an expression sometimes heard. But international ethicists believe that there are legitimate rules of war, and the wanton killing of civilians is against those rules. In September 1938 the League of Nations unanimously passed a resolution for “protection of civilian populations against bombing from the air in case of war.” That resolution was clear and direct: “The intentional bombing of civilian populations is illegal.”
Thus, March 10, 1945, could also be considered a day of infamy. On that day the U.S. Air Force firebombed Tokyo. Some 100,000 people were killed, most of them civilians! Then in August the terrible war ended soon after atomic bombs were dropped on Hiroshima and Nagasaki. And again, most of the causalities were civilians. Two more days of infamy!
In this country September 11, 2001, can be considered a day of infamy worse than the attack on Pearl Harbor. The terrorist attacks on 9/11 were on American soil, and almost all the causalities, about the same number as those killed on 12/7/41, were civilians.
And then there is good reason to consider March 19, 2003, a day of infamy also. That was the day the preemptive U.S. war on Iraq began. In the eight and a half years since then, more U.S. soldiers have been killed than the number of people killed by the attack on Pearl Harbor.
But even more, 3/19/03 is a day of infamy because the war initiated on that day has taken the lives of at least 100,000 civilian Iraqis, and perhaps considerably more than that.
Military and terrorists attacks, the wanton bombing of civilians, and the launching of preemptive wars are all days of infamy. And they are the very opposite of the Christmas vision of “peace on earth,” God’s dream for the world, about which I plan to write later this month.

P.S. I had not heard of others calling 3/19/03 a day of infamy, but after I posted the above TF Phil Rhoads sent me this picture: 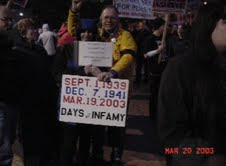