In Praise of Pope Leo and Labor Unions

One hundred and twenty years ago, on May 15, 1891, Pope Leo XIII issued the momentous encyclical Rerum Novarum (“Of New Things”). 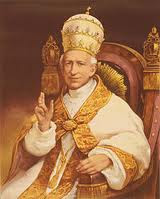 Leo XIII, who had been the pope for twenty-five years when he died in 1903, began his 1891 encyclical (formal statement sent to the bishops) by talking about the problem of “the enormous fortunes of some few individuals, and the utter poverty of the masses.”

While opposing socialism and affirming the right of private property, Pope Leo also recognized the right of workers to unite in labor unions. The latter was a significant new emphasis and one reason there have been special activities commemorating the 120th anniversary of Rerum Novarum. One such activity was held earlier this month at Catholic University in Washington, D.C., a university founded in 1887 with the approval of Pope Leo.

Even though issued 120 years ago, Pope Leo’s encyclical speaks directly to matters facing the nation at the present time. As you know, back in February there was a clash between the public-sector unions and Scott Walker, the governor of Wisconsin. In a highly politicized confrontation, the labor unions were demonized by one side and strongly supported by the other.

As you might guess, Rush Limbaugh was stanchly on the side of Gov. Walker and strongly against the position of the union leaders. But it was laughable to hear Limbaugh criticize the “greedy” union members of Wisconsin (and other states) when he has reportedly signed (in 2008) an eight-year contract for $400,000,000! How can anyone who makes $137,000 a day (!) have the gall to call to people greedy who make far, far less than that a year?!

Doubtlessly there have been excesses in some of the demands and practices of labor unions through the years. But many of the things that we take for granted now were due largely to the efforts of the labor unions and their work since 1891, things like the forty-hour work week, child labor laws, unemployment benefits, factory safety laws, and the like.

It is widely recognized that labor unions tend to support the Democratic Party, so Democrats are charging that Gov. Walker and others are opposing the unions primarily to lessen financial contributions to Democratic candidates. Conversely, the Republicans are charging that the Democrats, and the President, are supporting the unions mainly in order to reap financial rewards for upcoming political campaigns.

But labor unions are not primarily about politics; they are about the welfare of workers. Thanks to those labor unions—and their support in Pope Leo’s 1891 encyclical—the workers of the nation are far better off, and far less exploited, than they would be otherwise. In the U.S. and other industrialized countries of the world “the enormous fortunes of some few individuals” still exists. But, thankfully, partly due to the labor unions, it is no longer necessary to speak of “the utter poverty of the masses.”
Posted by LKSeat at 6:04 AM