Enslaved to the System 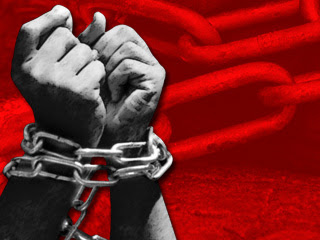 What was the primary cause of the Civil War? Most Northerners, among whom I self-identify, would say that the War Between the States was fought mainly because of slavery and the desire to abolish such a sinful system.

But from the time of the War until the present many Southerners have disagreed. They would be more likely to say that the South launched the Civil War, which started 150 years ago last month, in order to protect their way of life and to preserve the rights of the Southern states.

And the Southerners may be right. It seems that freeing the slaves was not uppermost even in Lincoln’s mind at the beginning of the War. Preserving the Union was. Two years before becoming President he uttered the well-known words, citing Matthew 12:25, “A house divided against itself cannot stand. I believe this government cannot endure, permanently, half slave and half free.”

Slavery was certainly a pivotal issue, but preserving the Union seems to have been Lincoln’s major concern. During the second year of the War, though, Lincoln did decide that freeing the slaves was the right thing to do, and long before the War ended, on January 1, 1863, he issued the Emancipation Proclamation.

But what about the argument of the Southerners; why do I say they may be right? I think it is clear that their major concern was, in fact, preserving their way of life. But the problem is, their way of life depended on slavery. The affluent lifestyle of the landowners was made possible only by their slaves.

Yet in another sense the Southerners were wrong: the war was about slavery. They, as well as most Northerners, were enslaved to the system, the system of capitalism. And in the South capitalism depended on the continuation of slavery.

So it can be argued that the central issue of the Civil War was largely an economic one. The Southerners did not particularly hold animosity toward their slaves. True, some slave-owners did mistreat their slaves just as some farmers mistreated their horses. But most didn’t.

The Southerners didn’t favor slavery because of their dislike of those dark-skinned people who worked for them in the cotton fields and elsewhere. They supported slavery almost entirely for economic interests, although there were other personal benefits that accompanied having slaves in the household.

Those who had the biggest financial stake in preserving slavery tended to be the biggest supporters of the Civil War, and most of those who fought against slavery were largely those who had few, if any, direct economic ties to the system of slavery.

And now in the 21st century, perhaps most of us in this country, and especially the politicians in charge of the legislative and executives branches of the government, seem to be largely enslaved to the corporations, the bastion of capitalism, just as the Southerners were enslaved to the system of slavery in the middle of the 19th century.

When and how will emancipation come this time?
Posted by LKSeat at 6:34 AM