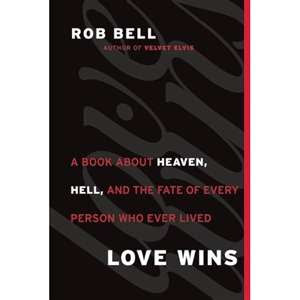 Rob Bell is a pastor and an author. Love Wins: A Book About Heaven, Hell, and the Fate of Every Person Who Ever Lived, his new book published just this month, has created a lot of discussion, not only in Christian circles but in the secular world as well. The Wall Street Journal published a review of Bell’s new book in its March 18 issue, and this month he has also been interviewed on Good Morning America, Morning Joe, and other TV programs.
Bell (b. 1970), a graduate of Wheaton College and Fuller Theological Seminary, is the founding pastor of the Mars Hill Bible Church in Grand Rapids, MI. His first book, Velvet Elvis (2005) was a bestseller and his new book is already on the bestseller lists. It debuted on the USAToday Top 150 at #15 (based on sales through March 20), and on March 25 it was #4 among all books sold on Amazon.com.
Much of the interest in, and criticism of, Bell’s book is because of what he says about hell. He thinks that there is a hell, but it is a view far different from the traditional idea held by most conservative/evangelical Christians and by most Catholics. Bell understands hell as primarily the suffering that people experience now because of the bad choices they, or others, make.
From the very beginning of his book, Bell calls into serious question the view that “a select few Christians will spend forever in a peaceful, joyous place called heaven, while the rest of humanity spends forever in torment and punishment in hell with no chance for anything better” (p. viii).

“Hell” is the title of Bell's third chapter, and there he acknowledges that “God gives us what we want, and if that’s hell, we can have it” (p. 72). This is due to “the freedom that love requires” (p. 111). (One of my seminary professors used to say that hell is “Love’s rejection of the rejection of love.”)

Not surprisingly, some conservative/fundamentalist Christians have staunchly criticized Bell’s views on hell and related matters. And a Methodist pastor in North Carolina has even been dismissed from his pastorate because of his positive statements about Bell’s book. (You can read about the pastor and church here.)

As for me, I was favorably impressed with Bell’s book. At the very least, it gives us a lot that we need to think about seriously and to discuss. I wondered, though, why he did not deal with the position known as annihiliationism. I write about that idea and other matters related to hell in my The Limits of Liberalism (pp. 225-7), ending that section by saying that my position ”does not embrace the harshness of the traditional view, but still takes sin and its consequences much more seriously than the position held by most Christian liberals.”
Posted by LKSeat at 7:08 AM