What about the National Cathedral?

One of my favorite places to visit in Washington, D.C., is the National Cathedral, and I have been there several times. Although I have some conflicted feelings about it, I am in total agreement with a public statement the clergy there made last month. 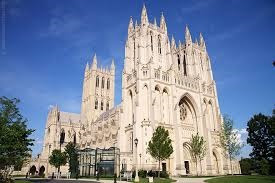 Liking the National Cathedral
The Cathedral Church of Saint Peter and Saint Paul in the City and Diocese of Washington is the official name of what is generally called the Washington National Cathedral. It contains a cathedra (Latin for seat) for both Bishop Mariann Edgar Budde of the Episcopal Diocese of Washington and Bishop Michael Curry, presiding bishop of the Episcopal Church.
The cornerstone for the Cathedral was laid in September 1907, and “only” 83 years later the building was pronounced finished in 1990. But just 21 years later it suffered $20,000,000 in damage from a rare earthquake, and repairs are still being made to the magnificent building.
And certainly, the National Cathedral is a magnificent building with a magnificent organ that, unfortunately, was also badly damaged in the 2011 earthquake. The “Great Organ” was installed in 1938 and last upgraded in 1975. It has more than 10,600 pipes!
Many years ago, I stood in the center aisle listening to the organ postlude, and I was so overcome by the beauty of the Cathedral and the power of the organ music that tears began to trickle down my cheeks.
Questioning the National Cathedral
Despite my fondness for the National Cathedral, I have questions about it because of the separation of church and state issue that I wrote about briefly in my July 25 blog article.
In 1791, Pierre L'Enfant drew up plans for a “federal city” and presented them to President Washington. Those plans for the city that became Washington, D.C., included the idea of “a great church for national purposes.”
The idea was to have a church in the U.S. that plays a role similar to England’s Westminster Abbey. That Abbey was re-established in 1560 as an Anglican church responsible directly to the English monarch.
There is no question about the lack of separation of church and state in England. To the extent that the National Cathedral is similar to Westminster Abbey—and who could deny that in many ways it is—how can it not also border on the infringement of the principle of church and state?
Applauding the National Cathedral’s Statement
In my book Fed Up with Fundamentalism, I suggest that the phrase “a free church in a free state” is perhaps better than “separation of church and state.”
That being the case, it seems clear that the National Cathedral, despite hosting prayer services for the last five presidential inaugurations, including that for DJT in 2017, the clergy of the Cathedral evidently feel completely free to criticize the President.
On July 30, Bishop Budde, as well as the dean and the canon theologian of Washington Cathedral, made public a 670-word statement titled, “Have We No Decency? A Response to President Trump” (If you haven’t read it yet, click here to see the full statement.)
That was a powerful response to DJT’s highly objectionable tweets about Rep. Elijah Cummins and the city of Baltimore on July 27. Among other things, the leaders of the National Cathedral declared, “Make no mistake about it, words matter. And, Mr. Trump’s words are dangerous.”
They closed, then, with this noteworthy statement:

On January 21, 2017, Washington National Cathedral hosted an interfaith national prayer service, a sacred tradition to honor the peaceful transfer of political power. We prayed for the President and his young Administration to have “wisdom and grace in the exercise of their duties that they may serve all people of this nation, and promote the dignity and freedom of every person.”

That remains our prayer today for us all.