The Appeal of Fundamentalism

Since fundamentalism has been so widespread and influential in the past decades, its popularity must surely be because there are many people who find it appealing. This article, based on the third chapter of my book Fed Up with Fundamentalism (FuF, which I am in the process of updating) analyzes some of that appeal.
The Religious Appeal
Since Christian fundamentalism claims to uphold, to preserve, and/or to restore the true faith, many believers who are serious about their faith are naturally drawn to the type of Christianity that makes such claims.
Especially for non-creedal Protestant Christians, the Bible is the basis for all faith and action. Thus, any questioning of the veracity of the Bible is seen by many such Christians as a potentially dangerous attack on the faith.
The fundamentalist emphasis on an inerrant Bible, consequently, has great appeal for all who wish to protect Christianity from attacks.
Fundamentalism, which is sometimes little more than traditionalism, is also appealing to many because of its emphasis on a glorious past. Such Christians have been happy to sing “Give Me that Old Time Religion” and have seen fundamentalism as the effort to protect that hallowed tradition from the eroding effects of “modernism.” 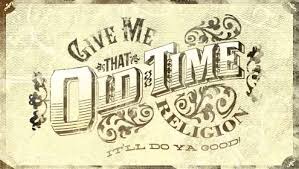 Further, fundamentalism’s affirmation of a type of faith that doesn’t compromise is appealing to some, for compromise is seen as a weakness--and a factor that weakens robust Christianity.
The Psychological Appeal
In addition to the religious appeal, there is also a psychological appeal in fundamentalism--such as is seen in its emphasis on simplicity and certainty.
Others find fundamentalism psychologically appealing because of the pride factor and/or the fear factor.
One of the bestselling novels of 2004 was Michael Crichton’s State of Fear. It was not about religion, but one of the characters in the book declares, “I'm telling you, this is the way modern society works--by the constant creation of fear” (p. 456).
That has been how fundamentalism works also. The fostering of fear has been strong in fundamentalism from its beginning to the present--and the claim of fundamentalist preachers that their message overcomes those fears has been psychologically appealing to many people.
The Political Appeal
From the beginning of Christian fundamentalism a century ago, there has been a strong strain of American patriotism--or even nationalism--in it. Many conservative evangelical leaders have claimed that the United States was a Christian nation from the beginning and that it is up to Christians to see that it stays that way.
While FuF considers fundamentalism mainly up to the year 2005, we have seen even more in the years since then how conservative evangelicals have aligned with the Republican Party.
The inexplicably overwhelming support of DJT by conservative evangelicals show how fundamentalism and politics have become strongly intertwined. The MAGA emphasis of DJT is one of several political appeals to Christian conservatives.
It is quite likely that, on the other hand, conservative Protestant churches are the most appealing form of Christianity to the MAGA enthusiasts who are not Christians.
My March 5 blog article was about Project Blitz, and those political efforts of conservative evangelicals are appealing to those who want to make America great again by restoring it to the type of society it was in the 18th century.
In spite of these various appeals of fundamentalism, though, there are plenty of problems in it that repel many people. Next month I plan to post an article based on “The Problem with Fundamentalism,” the fourth chapter of FuF.