Can You Hear the Christmas Bells?

Five days ago I posted a blog article about Charles Dickens’s famous novella “A Christmas Carol.” This article is about a powerful Christmas poem Henry Wadsworth Longfellow wrote twenty years later, in 1863.
Longfellow (1807~82) was unquestionably one of the most famous American poets of the 19th century. When I was in elementary school, I read some of his poems—which I assume is true for many of you. I am thinking particularly of “The Village Blacksmith” (1842) and “Paul Revere’s Ride” (1860).
Although I probably didn’t first read it until later, one of my favorite Longfellow poems is “A Psalm of Life” (1839). If you haven’t read that powerful poem recently, I encourage you to take a couple of minutes to click here and read it.
For those of you who like good novels, I highly recommend Jennifer Chiaverini’s delightful Christmas Bells (2015), which in alternating chapters toggles between the historical story of Longfellow in the 1860s and a contemporary fictional story set in Boston and featuring a children’s choir practicing “I Heard the Bells on Christmas Day.” 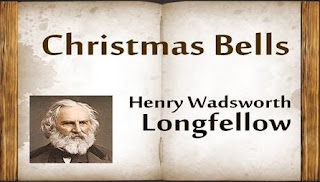 
Merry Christmas!
Posted by LKSeat at 5:31 AM