Ed Chasteen is a friend I first met over 40 years ago, and tomorrow (Nov. 16) he is celebrating his 83rd birthday. This article was written to wish Ed a happy birthday. But even more, I have written it to introduce a remarkable man to those who do not know him.
Becoming a Prof
Edgar R. Chasteen was born in Texas and lived in Huntsville from 1948 to 1958. He was baptized in a Baptist church there when he was 13. In 1954 he enrolled in Sam Houston State Teacher’s College and majored in sociology. When he was 21 he married his wife, Bobbie, and they celebrated their 60th wedding anniversary last year.
After earning his Ph.D. at the University of Missouri, Ed was employed by William Jewell College (in Liberty, Mo.) where he taught sociology, and especially a course in race relations, from 1965 to 1995.
Two matters of great importance occurred during those years when Ed was a prof at William Jewell: he was diagnosed with multiple sclerosis (MS) and a few years later he founded HateBusters.
The “Peddlin’ Prof”
In 1981 Ed received the terrible news that he had MS. The doctors said he could no longer be active. But after two or three years, and against his doctor’s orders, Ed began to fight his illness by riding a bicycle.
And ride he did! In 1987 he rode over 5,100 miles in 105 days, peddling from Disney World to Disneyland. He rode alone and without any money on him—and with great success. Disney dubbed him “the pedalin’ prof from William Jewell College.”
And he has continued to ride his bicycle since then: in 2003 he rode 10,000 miles to raise funds for MS and HateBusters.
In 2004 the National Multiple Sclerosis Society named Ed an MS Achievement Award winner.
It has now been 37 years since he was first diagnosed with MS—and Ed is still active and still rides his bicycle—but earlier this year he had to give up riding outside. He now rides about 50 miles a week inside on his stationary bike.
The HateBusting Prof
About 30 years ago—soon after David Duke, the former imperial wizard of the Ku Klux Klan, won a seat in the Louisiana legislature—Ed and his sociology students at William Jewell College started a group, or perhaps it is better considered a movement, called HateBusters.
The name, and the logo found on their tee shirts, was taken from the popular 1984 film "Ghostbusters." The picture is several years old (taken when he was about 75), but here is a picture of Ed in a HateBuster tee shirt and his personalized bicycle: 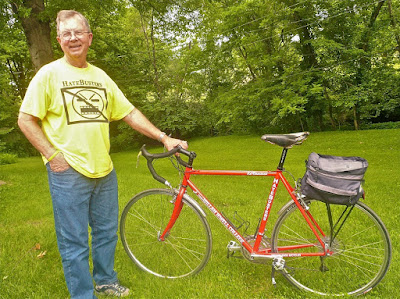 HateBusters has primarily worked in opposition to hate directed toward people because of their race/ethnicity or because of their religion and in support of those who have been victims of hate.
According to their website (see here), HateBusters’ first objective is “To oppose hate wherever we find it and in whatever form it takes.” And when an act of hate occurs, they seek to go “help redeem the situation.”
On Monday of this week, I had breakfast and a delightful conversation with Ed. I was impressed, again, with his mental vitality in spite of his debilitating physical illness and with his deep-seated desire to combat hate and prejudice and to create a world filled with people who live in harmony and practice mutual respect.
Happy Birthday, Ed! The world badly needs more people like you.
For further information:
** Here is the link to a May 2017 VOA article and video about Ed and HateBusters.
** Most of Ed’s books are available for downloading at the website linked to above. Some books are directly related to MS and some to HateBusters, including a 1996 book with 42 issues of “HateBusters Bulletin.”