The bulk of this article is taken from the next to last chapter of my as yet unpublished book Thirty True Things Everyone Needs to Know Now (TTT). The final section of that chapter is included here, but I encourage you to click this link and also read the first three sections of the chapter.
The Case for Kindness
Christians have not always been kind to one another. The Catholic inquisitions of the Middle Ages, in which people designated as heretics were hunted down and executed, are infamous. Enmity and strife between Protestants and Catholics existed from the beginning of the Reformation, and Protestants began killing other Protestants as early as 1527.
Although there have not been religious wars in this country, still among Christian denominations and even within national and local churches often there has been harshness, incivility, and unkindness.
All of this is woefully contradictory to a challenging Biblical admonition: “Be kind to one another, tender-hearted, forgiving each other, just as God in Christ also has forgiven you.”
Instead of being tough-minded and tender-hearted, too many Christians have too often been tender-minded and hard-hearted.
One of my favorite contemporary Christian authors has written a book titled Generous Orthodoxy. That is a good emphasis when it comes to theology; Christian thinkers need to be accepting and magnanimous rather than being mean-spirited and unkind.
The same is true for Christian believers of all kinds—and for adherents of others religions as well—as we seek to live out our faith. We need to be generous and open-minded in our evaluation of others rather than being critical and judgmental.
In a recent translation, 1 Peter 3:8 admonishes, “Be agreeable, be sympathetic, be loving, be compassionate, be humble. That goes for all of you, no exceptions.” These are good words to consider, and hard words to put into practice consistently.
But when we are tempted to say, or even think, critical words about other people, we need to recall this injunction to be sympathetic, loving, and compassionate.
When I was a freshman in college, I bought a little book titled Everyday Religion. I profited from reading that book then as a young man and I found it delightfully helpful when I read through it again a few years ago.
The first chapter is “When We Really Live,” and I have remembered through the years how the author says that we really live when, among other things, we know how to be “a little kinder than necessary every day.”
So when we start to be harsh and judgmental in evaluation of others, or ourselves, let’s remember these words and try, indeed, to be a little kinder than necessary. If we can do that, we will find that everyone will be better off. 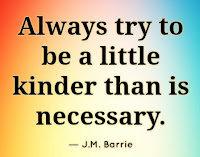 Denouncing Anti-Semitism
Although not a part of the 29th chapter of TTT, last Saturday’s mass murder of Jews in Pittsburgh prompts me to reflect on how Christians, among others, have often not been kind, to say the least, toward Jewish people.
Although religious differences are real—and important—nothing can justify mistreatment of other people because of their religion or ethnicity.
This article is being posted on the morning before Reformation Day, which commemorates the beginning of the Protestant Reformation led by Martin Luther. Sadly, though, Luther’s judgmental and condemnatory words about the Jewish people have had a lasting negative impact on many Protestant Christians.
Please join me in sending condolences to those who are grieving in Pittsburgh, in denouncing all forms of anti-Semitism, and in pledging to be as kind as possible to all people, regardless of their religion (or lack thereof) or ethnicity.