A White Politician, a Hispanic Activist, and a Distraught Palestinian Walk into the Ambassador Hotel

For of all sad words of tongue and pen,
The saddest are these: “It might have been!”
(John Greenleaf Whittier, 1856)
I couldn’t help but think of these well-known words when reflecting on the tragic events that happened in the first hour of June 5, 1968.
The White Politician
Robert F. (Bobby) Kennedy won the Democratic presidential primary in California on June 4, 1968. Late that night he walked into the Ambassador Hotel in Los Angeles to join many of his enthusiastic supporters for a vivacious victory celebration. 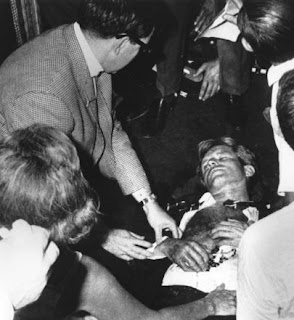 Just after midnight, Kennedy decided to call it a night. Hemmed in by the crowd, he followed the maître d'hôtel through the kitchen/pantry area of the hotel in order to exit by a back door.
RFK never made it out of the hotel on his own, for as he passed through the back kitchen area he was shot several times at close range. Rushed to the Good Samaritan Hospital (about ten minutes away), he died less than 26 hours later.
There is good reason to think that had he not been killed, RFK would have garnered the Democratic nomination for President in 1968.
In the November election, Richard Nixon just barely won the popular vote—and there is also good reason to think that he well may have lost the election if RFK had been his opponent.
“Of all sad words of tongue and pen . . . .”
The Hispanic Activist
Dolores Huerta had enthusiastically welcomed Kennedy to California in March 1968. Although long overshadowed by Cesar Chavez, she and Chavez were the co-founders of the National Farm Workers Association in 1962 and was/is an indefatigable civil rights activist.
In an interview posted (here) just last month, Huerta (b. 1930) vividly recalled the day RFK joined thousands of farmworkers in Central California to celebrate the end of Chavez's fast for nonviolence.
Huerta happily walked into the Ambassador Hotel after the close of the California primary, and then stood on the podium with RFK as he gave his acceptance speech on that fateful night of June 4/5.
(If you haven’t seen the recent PBS documentary on Huerta, available for viewing here, I highly recommend it.)
The Distraught Palestinian
Sirhan Sirhan was born (in 1944) in Jerusalem into an Arab Palestinian Christian family with Jordanian citizenship. When he was 12, his family emigrated to the U.S., moving to California after a brief time in New York.
On the night of June 4, 1968, Sirhan also walked into the Ambassador Hotel—but with a far different purpose than Kennedy’s or Huerta’s.

According to a reviewer of Mel Ayton’s book The Forgotten Terrorist (2007), “Sirhan Sirhan was not just a crazed 24-year-old Jordanian immigrant. He was in fact a radicalized Palestinian refugee with a clear political motive to attack the U.S. and its political institutions.”
As a New York Senator, Kennedy had a large Jewish constituency. With the June 1967 Six-Day War fresh in the headlines, to Sirhan and many other Palestinians, Kennedy's unfortunate pledge to arm Israel seemed to be a declaration of war against the Palestinian people.
Sirhan was soon arrested and the following year was sentenced to death for assassinating Kennedy. With the change in California laws of capital punishment, in 1972 his sentence was changed to life imprisonment.
Surprisingly, a May 26 article in the Washington Post (here) is titled “Who killed Bobby Kennedy? His son RFK Jr. doesn’t believe it was Sirhan Sirhan.”
Regardless, the assassination of RFK is said to be the first major incident of political violence in the U.S. stemming from the Arab–Israeli conflict.
Again, sad words about what could have been so very different.