In Appreciation of Walter Brueggemann

The most quoted contemporary Old Testament scholar is, arguably, Walter Brueggemann, and I am happy to be writing, finally, an article about this superlative scholar and articulate author, who celebrated his 85th birthday this past Sunday.
A Bit about Brueggemann
Born in Nebraska on March 11, 1933, Walter Brueggemann (WB) graduated from Eden Theological Seminary in Missouri—as did Reinhold Niebuhr before him. Then WB earned doctorates from both Union Theological Seminary and Saint Louis University. He was ordained in the United Church of Christ.
After 25 years as a professor at Eden, in 1986 WB moved to Columbia Theological Seminary in Georgia where he served as a professor until his retirement in 2003—but he has continued to write and to speak profusely.
WB has authored some 60 books, including commentaries on several Old Testament books. His slim book Interrupting Silence: God’s Command to Speak Out was published in February, and his newest book A Gospel of Hope will be released the end of this month.
In addition to his steady stream of books, WB is already scheduled to be a “keynote presenter” at the American Baptist Home Mission Societies’ triennial meeting in Philadelphia this November—and he has at least nine scheduled speaking engagements between now and then, some for two or three days.
(I am looking forward to hearing him speak at Asbury UMC in Prairie Village, Kan., on April 6.)
A Bit about a Brueggemann Book
One of WB’s best-known books is The Prophetic Imagination. He wrote the preface to that book’s first edition during Lent in 1978; I recently read the second edition that was published in 2001.
In the preface of the latter, WB mentions that for him Abraham Heschel is “definingly important” (p. xv). But unlike Rabbi Heschel, the author of The Prophets whom I wrote about (here) in December, as a Christian scholar WB sees Jesus as “the fulfillment and quintessence of the prophetic tradition” (p. 102).
The purpose of WB’s The Prophetic Imagination is not just to help his readers understand the past. It is even more to help them see what prophetic ministry means in the present. Thus, he asserts,

The first chapter is mostly about the “alternative consciousness” that was fostered by Moses. That is contrasted in the second chapter with the “royal consciousness” of King Solomon. The latter largely became the “dominant consciousness”—and the target of the Old Testament prophets.
WB contends that “Solomon was able to counter completely the counterculture of Moses.” He did this partly by countering “the economics of equality with the economics of affluence” and “the politics of justice with the politics of oppression” (p. 31).
The royal consciousness—then or now—doesn’t talk about anything new, so there is no hope for the future other than as an extension of the present, which is the continuation of the past. In contrast, WB emphasizes the “hope-filled language of prophecy” (p. 67). 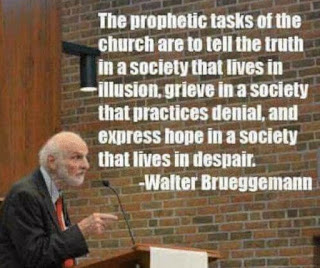 A Bit about BHO and DJT
As I was reading WB’s book, it seemed quite clear to me that the “Make America Great Again” slogan is an expression of the royal consciousness (emphasis on past glory and recovery of that past), which the prophets (including Jesus) opposed.
On the other hand, Obama emphasized newness and the “audacity of hope.” Although harshly criticized by the far right (because of his talk about “fundamental transformation”), at least to some extent BHO seems to have exhibited the prophetic imagination that still is so badly needed in the world today.